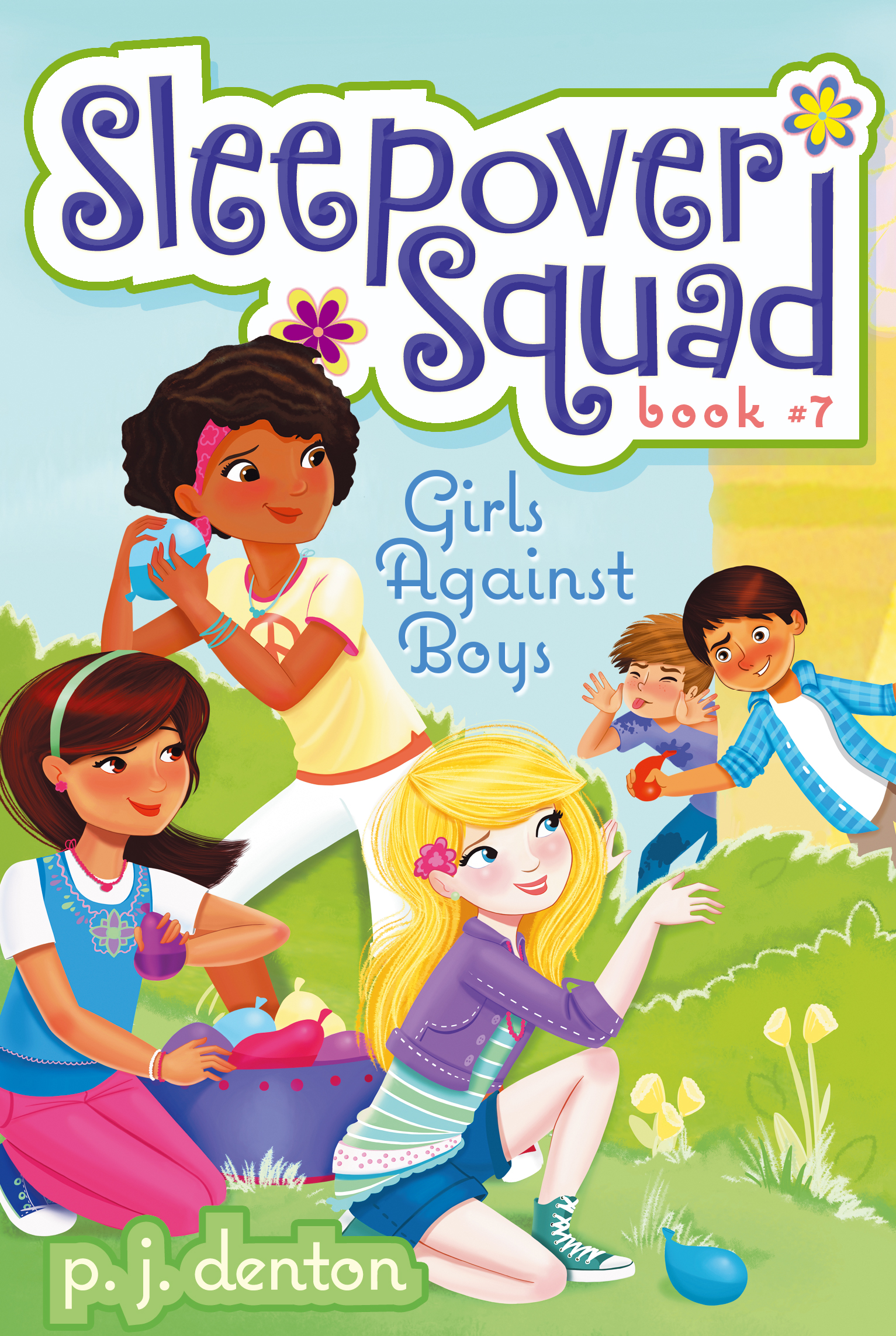 It’s Taylor’s turn to host a sleepover, which is exciting…except that her next-door neighbor—a bratty boy her own age—won’t leave her alone. And when he plans a sleepover for the same night as the Squad’s, Taylor is totally irked. But after the boys challenge the girls to an all-out sleepover competition, the fun is just beginning—or is it? Can Taylor trounce the boys and still keep her friends happy?

“Oh my gosh!” Kara Wyatt rolled over on her back on the grass and giggled as a tiny black-and-white kitten crawled up her shoulder. “Taylor, Mittens is soooo cute!”

Taylor Kent laughed as her new kitten batted a tiny white paw at Kara’s wavy red hair. “I know,” she said. “I can’t believe my parents actually let me get her!”

“Be careful,” Emily McDougal warned as Mittens jumped down and sniffed at a dandelion in the grass. “Don’t let her wander too far. We don’t want her to get lost outside.”

Jo Sanchez reached over to pet Mittens. “Don’t worry, Em. I don’t think she can run very fast on her tiny little legs. Besides, how far could she wander with all four of us staring at her?” She giggled, then sighed. “I guess I’m the only member of the Sleepover Squad without a pet now.”

Taylor, Jo, Emily, and Kara had formed a club called the Sleepover Squad. They took turns hosting sleepovers at each of their houses as often as they could.

But today the girls weren’t having a sleepover. They had all gathered in Taylor’s backyard to play with her new kitten. Mittens had only been a member of the Kent family for a little over a day. Taylor had always wanted to have a pet, but up until now her parents had always said no. She’d had to settle for playing with Kara’s dog, Chester, or Emily’s cat, Mi-Mo.

But now Taylor’s parents had finally decided she was responsible enough to help take care of a pet. They had taken Taylor to the animal shelter, where she had picked out Mittens. Mittens was going to be an indoor cat, but it was such a nice spring day that the girls had decided to take her outside for a while to play in the Kents’ square, grassy backyard.

Taylor reached over and tickled Mittens under the chin. The kitten started to purr loudly. Just then there was a sudden loud shout from the yard next door. Mittens jumped and stopped purring, her eyes wide and her nose twitching.

“Who was that?” Kara asked in surprise, looking over toward the next yard to see who had made the noise.

Taylor made a face. She and her parents lived in town, which meant the houses were fairly close together. Normally, she liked being close to their neighbors on each side. But over the past few days, that had changed—at least when it came to one particular neighbor.

“Ugh.” She picked up Mittens to let the kitten know she shouldn’t be scared. “I forgot to tell you guys. That’s Stan.”

“Who?” Emily looked confused. “I thought Mr. and Mrs. Sampson lived over there. Is Stan their grandson or something?”

Taylor shook her head. “The Sampsons moved out a couple of weeks ago,” she explained. “They went to live in Florida. The new owners are the Martins. They have a son named Stan who’s our age.”

“Really? That’s cool.” Jo tucked her dark hair behind her ear and shrugged. “You always complain about how there’s no one our age on this block.”

“No, it’s not cool,” Taylor corrected with a shudder. “Stan’s family only moved in this past Friday. But I can already tell that he’s totally obnoxious!”

Just then a boy came into view beyond the tidy hedge that separated the two yards. He was about Taylor’s height, with messy brown hair and round cheeks.

Taylor wished they’d decided to stay inside to play with Mittens. But it was too late now. Stan spotted them right away.

“Hi, Taylor,” he said, pushing his way through the hedge and wandering toward them. “Hey, what are you doing hanging out with a bunch of girls? With a name like Taylor, I thought you were a boy.”

Taylor rolled her eyes. “Very funny,” she said. Mittens was wriggling, so she set her down on the grass. “It’s almost as funny as it was the first ten times you said it.”

Stan stared at Kara and grinned. “Whoa,” he said. “You must eat a ton of carrots.”

Emily furrowed her brow, looking confused. “What do you mean?” she asked. “How can you tell what she eats?”

“Just look at her hair!” Stan pointed at Kara’s head. “How else would it end up bright orange like that? What’s your name—Carrotina?”

“Kara?” Stan let out a shout of laughter. “Are you serious? Your name’s really Kara? That totally sounds like it’s short for Carrotina. I knew it! Kara Carrotina, Kara Carrotina!”

Kara sighed. “Great,” she muttered. “Just what we need. Another obnoxious boy around here.”

Taylor knew that Kara was thinking about her four brothers. She always said they were the most obnoxious boys in the world. But Taylor was already convinced that Stan could give them a run for their money.

She was about to come to Kara’s defense by calling Stan a name in return—like Stanley Stupidhead. But she remembered just in time that her parents had asked her to be nice to the new neighbors. So she bit her tongue.

“Come on,” she said to her friends instead. “Maybe we should play with Mittens inside for a while.”

“Girls!” Gloria, the Kents’ housekeeper, stuck her head out the back door. “Bring the kitten back into the house, please. Emily’s father is here to drive her and Jo home. And Kara, your mother just called and said it’s time to head home for dinner.”

“Coming, Gloria,” Taylor called. Both her parents worked long hours at their jobs, and Gloria watched Taylor whenever they weren’t home. Sometimes she also came for a little while on the weekend, especially if Mr. and Mrs. Kent had errands to run or work to do at home. She had been doing all that for as long as Taylor could remember. Gloria lived in her own house on the other side of town, but other than that she was just like a member of the family.

“Aw, I wish we didn’t have to go.” Emily scooped up Mittens and gave her a gentle hug. The kitten batted at her long pale-blond hair, which made Emily giggle. “I could stay here and play with Mittens all night!”

Taylor grinned. That was just like Jo—she liked to be exact about things.

“Totally,” Taylor agreed. “I’ll ask my parents if I can have our next sleepover here on Saturday night. We can make it all about kittens!”

“A kitten sleepover?” Stan put in with a snort. “Sounds awfully girly for someone with a boy’s name. Plus, who ever heard of a giant walking carrot going to a sleepover?”

Taylor rolled her eyes. She had almost forgotten he was still standing there.

“Come on, girls,” she said, already heading toward the house. “Let’s go inside. We can finish talking about the sleepover in there.”
P. J. Denton