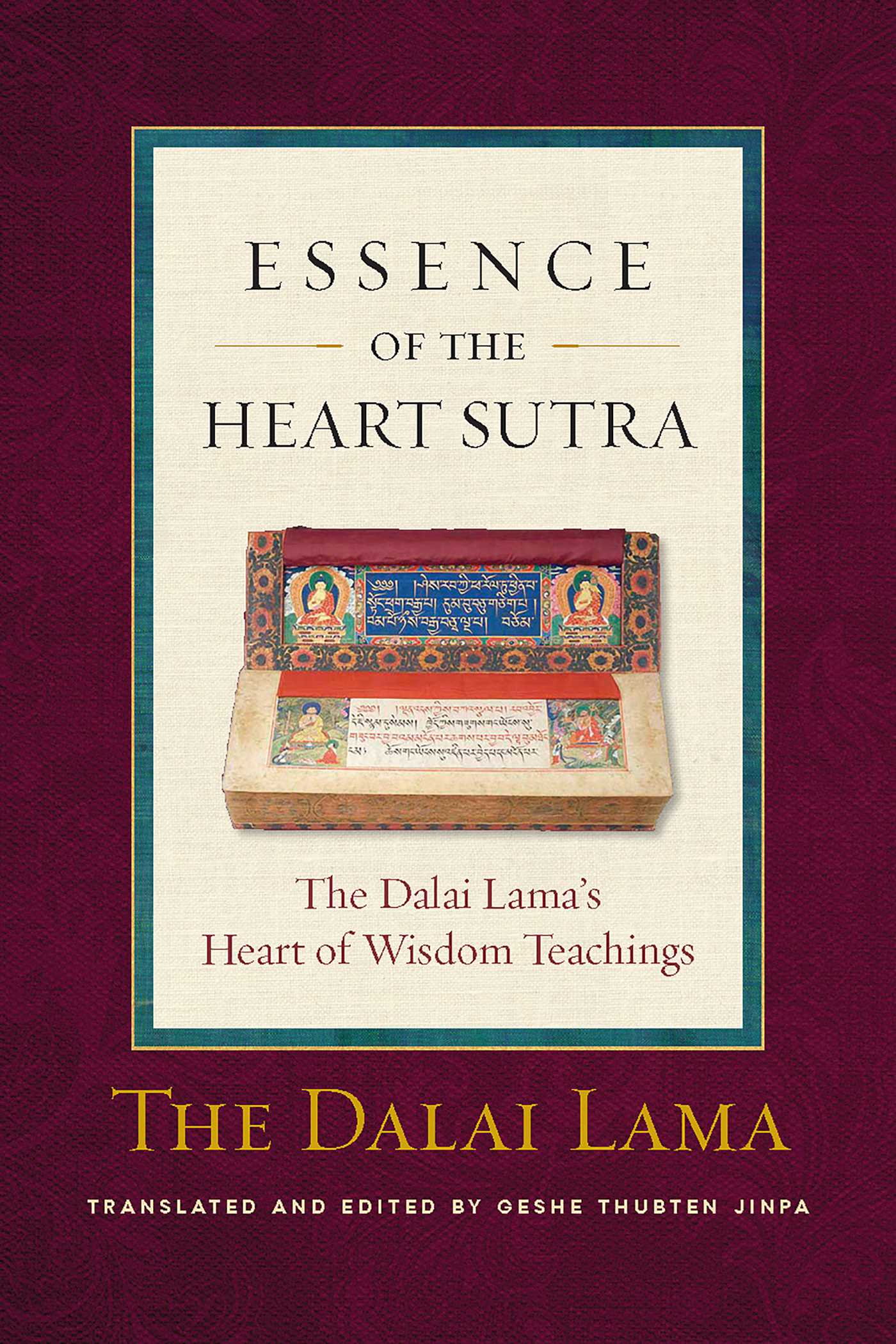 Essence of the Heart Sutra

For more than two thousand years, the Heart Sutra has been part of the daily life of millions of Buddhists. This concise text, so rich and laden with meaning, concentrates the very heart of Buddhism into a powerful and evocative teaching on the interdependence of all reality.

In Essence of the Heart Sutra, the Dalai Lama masterfully unpacks the Heart Sutra so that any reader can benefit from its teachings - teachings meant to help us release ourselves from suffering and live with true compassion. Comprised of his ""Heart of Wisdom"" talks, originally delivered to thousands of listeners in 2001, the book offers the Dalai Lama's commentary as well as his easy-to-follow overview of Buddhist philosophy that places the sutra within its historical and philosophical context. With additional contributions by scholar and translator Thupten Jinpa, Essence of the Heart Sutra is the authoritative presentation of a text seminal to the world's religious heritage.

Thupten Jinpa Langri was educated in the classical Tibetan monastic academia and received the highest academic degree of Geshe Lharam (equivalent to a doctorate in divinity). Jinpa also holds a BA in philosophy and a PhD in religious studies, both from the University of Cambridge, England. Since 1985, he has been the principal English-language translator to the Dalai Lama. He has translated and edited many books by the Dalai Lama, including The World of Tibetan Buddhism, Essence of the Heart Sutra, and Ethics for the New Millennium. Jinpa has published scholarly articles on various aspects of Tibetan culture, Buddhism, and philosophy, and books such as Songs of Spiritual Experience (co-authored) and Self, Reality and Reason in Tibetan Thought. He serves on the advisory board of numerous educational and cultural organizations in North America, Europe, and India. He is currently the president and the editor-in-chief of the Institute of Tibetan Classics, a nonprofit educational organization dedicated to translating key Tibetan classics into contemporary languages. He also currently chairs the Mind and Life Institute.

"Lovingly and wisely edited by Jinpa, the bulk of the book is consumed with a fairly meaty exploration of the Heart of Wisdom sutra, a classical Mahayana text, and as such will be useful to established practitioners as well as neophytes."

"In this volume, the Dalai Lama demonstrates how the core teachings of Buddhism and other major schools of thought are contained within the text of the Heart Sutra. [In fact,] the worldview in these ancient teachings has an eerie resemblance to the world as described by 20th-century quantum physics. ... With his usual penetrating intelligence, simple humanity, humor and compassion, he advocates that we should maintain our own spiritual traditions (Hindu, Christian, etc) while learning from others. 'In family life, social life, working life, and political life, inner disarmament is, above all, what humanity needs.'"

"In the spring of 2001, the Dalai Lama spoke to an audience of 8,000 people in California. This book is a translation of that teaching. He begins with a morally stirring defense of the spiritual practice of unity saying that we are not strangers--all of us are human beings: 'Differences in belief, just like differences in experience, are minor compared to our common humanity. The essential thing is that we are all the same in being human--thinking, feeling and being aware. We all share this one planet and we are all members of one big human family.' Courageous words from a spiritual leader in exile. Stirring words from a wisdom teacher who refuses to give in to tribal hatreds and violence afoot all around the world. The Dalai Lama believes that all the world's religions must speak out in support of compassion, forgiveness, brotherhood, and sisterhood. That is why he also calls for global participation in inner disarmament by individuals and communities. In the second half of this volume, the Dalai Lama talks about the Heart Sutra and its emphasis upon emptiness as a prelude to compassion."

"In Essence of the Heart Sutra, the Dalai Lama translates and interprets a central teaching of Buddhism with his trademark precision and straight talk. In the Heart Sutra, the bodhisattva Avalokiteshvara describes how to train in the perfection of wisdom by seeing through the illusions of all things. The Dalai Lama goes through the text passage by passage, after an extensive introduction to the basics of Buddhism and the Mahayana tradition's emphasis on emptiness, and shows how understanding emptiness is a key to happiness and liberation from suffering. Who better to explain it than the man reported to be the present-day incarnation of Avalokiteshvara himself?"--

Essence of the Heart Sutra