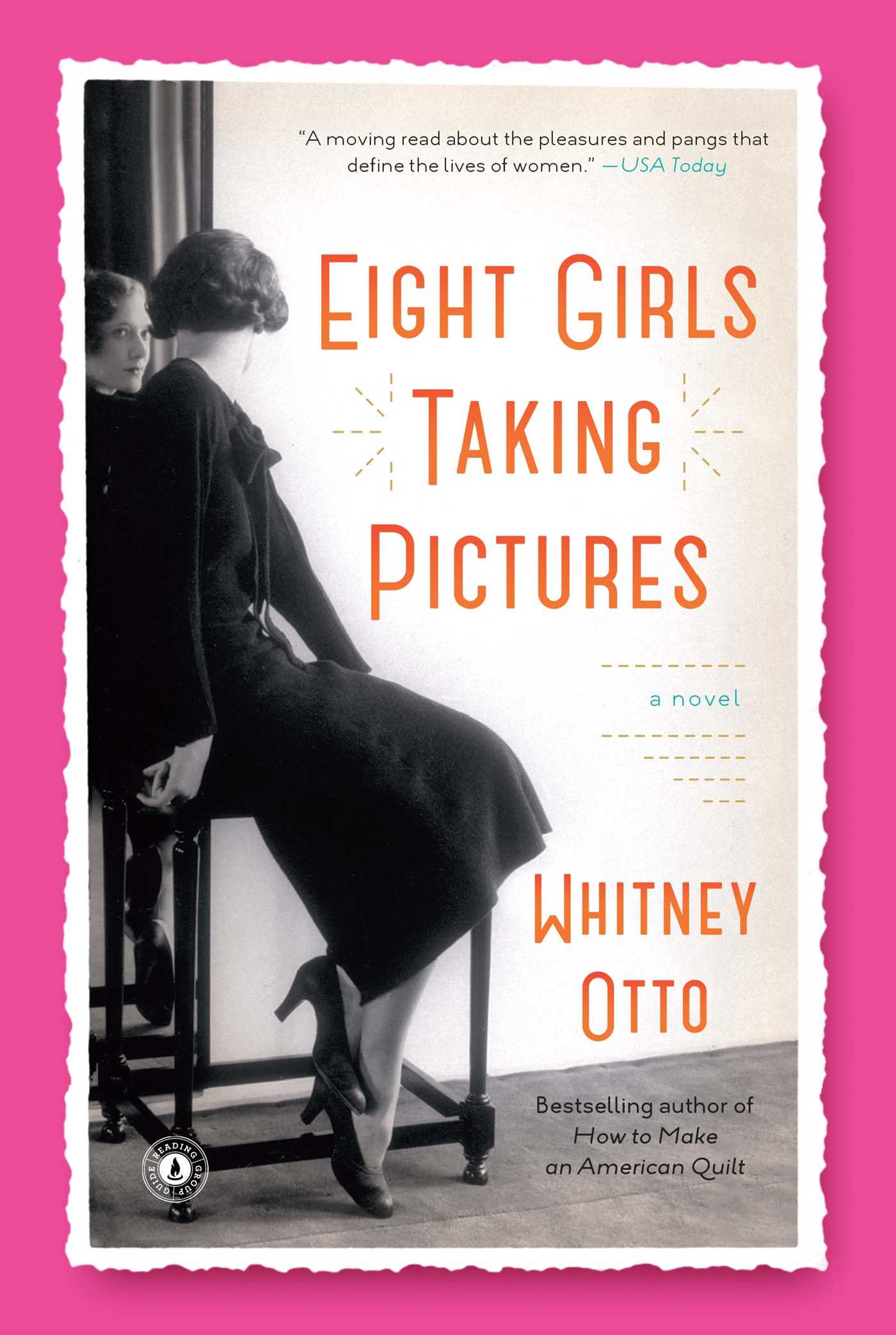 “A moving read about the pleasures and pangs that define the lives of women” (USA TODAY) from the bestselling author of How to Make an American Quilt.

A profoundly moving portrayal of the lives of women, imagining the thoughts and events that produced eight famous female photographers of the twentieth century. Inspired by the work of Imogen Cunningham, Madame Yevonde, Tina Modotti, Grete Stern, Lee Miller, Ruth Orkin, and others, author Whitney Otto weaves together eight stories, crisscrossing the world and a century to portray the tensions that defined the lives of female artists. These memorable characters seek the extraordinary through their art, yet also find meaning and reward in the ordinary tasks of motherhood, marriage, and domesticity. This is a bold, immersive, and unforgettable novel about women in love.

By clicking 'Sign me up' I acknowledge that I have read and agree to the privacy policy and terms of use, and the transfer of my personal data to the United States, where the privacy laws may be different than those in my country of residence.
This reading group guide for Eight Girls Taking Pictures includes an introduction, discussion questions, and ideas for enhancing your book club. The suggested questions are intended to help your reading group find new and interesting angles and topics for your discussion. We hope that these ideas will enrich your conversation and increase your enjoyment of the book.

This mesmerizing novel reimagines the public and private lives of eight groundbreaking female photographers and illuminates their shared dreams and struggles. Eight Girls Taking Pictures offer a fascinating portrait gallery of spirited, creative women across time and against the backdrop of some of the twentieth century’s most momentous events. Eight Girls Taking Pictures is about women and the tension they experience—between wanting a private life or a public life; love or passion; art or domesticity; children or creative freedom. Each of these women comes from different circumstances and live at different times in history, yet, they all struggle with similar desires, dreams, and aspirations.

1. Eight Girls Taking Pictures spans the greater part of the twentieth century. How did the roles of women in society change during this time? How about women artists specifically? What might 21st-century women be able to learn from the novel’s main characters?

2. Describe Cymbeline and Leroy’s relationship. How much responsibility does she bear for her unhappy—and unfulfilling—marriage? Taking into consideration the early 1900s time period, was Cymbeline, as she says, naïve to think she could have both a creative life and children? Why or why not? Which of the other characters struggle with this same conflict? Do their struggles reflect the times in which they lived or are their challenges a function of gender rather than time?

3. Although some of the featured photographers casually cross paths, Cymbeline is the one who most interacts with the seven other women. Why do you suppose the author chose to have her as the central link in the novel? What is the significance of Jenny finding Cymbeline’s glass plates from her time in Berlin?

4. What are the different characters’ motivations for pursuing photography? In what ways is the art form more than a livelihood to them? How do they use photography to resolve personal problems, confront social issues, and support political causes?

5. Discuss how the characters’ upbringings impact the directions of their lives. What similarities are there in the ways they were raised and in their parents’ attitudes and beliefs? Which of the women were aided or influenced by their fathers in particular?

6. “Amazing to think that her life could completely change course in the space of a single encounter; then again, the impact of chance encounters was something that she had known about for a very long time” (page 176), thinks Lenny after meeting magazine owner Kristof Nash on the street. What other chance encounters have momentous outcomes for the characters?

7. What was your initial perception of Lenny? What elements of the story did you see in a new way after the traumatic incident in her past was revealed? Why does Lenny believe she finds her “truest self” (page 220) during her time as a World War II photojournalist?

8. Charlotte believes that Ines “will understand better than anyone that a woman always has to choose” (page 301). Why does Charlotte decide to remain in Buenos Aires? Is her decision more of a choice between Ignacio and Ines or between creative fulfillment and a romantic relationship?

9. Discuss how marriage is presented in Eight Girls Taking Pictures, from Clara and Laurent’s charade to Madame Amadora acquiescing to her husband’s request that they not have children. Who would you say has the most fulfilling marriage, and why?

10. “One of the worst losses of all when one immigrated was the loss of occupation (doctor, lawyer, glass manufacturer), being as closely tied as it is to personal value and identity. To go from being ‘somebody’ to being ‘nobody’ takes its toll” (page 290), ruminates Charlotte after being forced to leave Berlin. How might this idea also apply to women who are expected to give up their careers after marrying and having children?

11. What similarities does Cymbeline see in Miri’s cityscape images taken from a high-rise window and her own garden pictures? Miri’s other famous photos featuring Daisy in Italy were published twice, first in the 1950s and then again in the 1960s. Why do the exact same photos elicit vastly different reactions a decade apart? How do they reflect the cultural changes of the times?

12. “This was before feminism took another odd turn…when it seemed that women were being encouraged to pursue who they really were, unless that included being a housewife, which, somehow, was no longer a politically acceptable choice” (page 337), muses Miri. How does this relate to her situation in the 1960s? How about to Jenny’s circumstances two decades later? What, overall, does the novel have to say about feminism?

13. What does Jessie learn from Cymbeline about photography, as well as about life and relationships, during the day they spend together? Do you think Jessie stays with Emile after this? Why or why not?

14. How do you interpret Cymbeline’s remark to Jessie that she doesn’t understand how “young women can get it so right and so wrong at the same time” (page 374)? Why does she believe things are harder for contemporary women than they were in her time?

15. Which character’s story resonated with you the most, and why? If any of the women could go back and undo some of the choices they made, which ones do you think would do so? What would they do differently?

16. Consider our current obsession with posting photos on Facebook and Tumblr and pinning photos on Pinterest. What do these contemporary photo essays say about our desire to document and be seen?

1. In keeping with the theme of the novel, visit a photography exhibit at a local museum or gallery. Or have each member bring an interesting or unusual photo to your group’s discussion of Eight Girls Taking Pictures and share what it is you find captivating about the image.

2. Have one or more members bring a camera to your book club gathering and document the evening’s festivities; get creative and dress fancifully like some of the characters and their subjects do in the story.

3. One of Jessie’s favorite pastimes is visiting the homes of female artists and writers. Check out www.LiteraryTourist.com to see what houses or museums are closest to your town and take a road trip with your group.

4. Have each member research one of the real-life photos or artworks mentioned in the novel, such as “Distributing Arms” (www.Diego-Rivera.com; gallery 3), the mural featuring artist Frieda Kahlo and “Clara Argento,” who is modeled on photographer Tina Modotti. Or Ruth Orkin, who inspired the character of Miri Marx, has a famous photograph titled “An American Girl in Italy, 1951,” which can be seen here: www.orkinphoto.com/photographs/american-girl. Do these photographs look the way you imagined them while reading the novel? How has Whitney Otto’s novel influenced the way you see the pictures?

Whitney Otto is the author of five novels, including the New York Times bestseller, How to Make an American Quilt. She lives in Portland, Oregon with her family.

"Thoughtful, nuanced depictions of the complexity of women's lives...Eight Girls is a moving read about the pleasures and pangs that define the lives of women."

"A rich ensemble novel...full of glamour and grit."

" Otto’s photographers battle society’s denunciations and personal demons as they seek love, acceptance, success, and harmony. A visionary and distinctive look at the sacrifices and triumphs of daring women artists."

“Otto skillfully develops each character and draws the reader in with rich detail that must be the result of careful and extensive research. Highly recommended; those with an interest in photography, women’s history, or feminist literature should particularly enjoy.”

"Blending Otto's saturated yet accessible prose with her talent for stitching together stories of multiple characters with a steady, glittering needle, the novel pays homage to a number of 20th-century photographers whose lives inspired its eight interwoven tales. Otto's vivid narratives of these women's lives-often bohemian, occasionally luxurious, always richly intellectual and full of love-render them as complete, complicated mediums between their cameras and a world that treats them so ambivalently."

"The reader is captivated and transported on several levels with a book that rings with universal truths as it pays homage to eight very real ground-breaking photographers. You don’t have to be an art historian nor even like photography to love this deeply soul satisfying work. Each work is a gem to be savored and appreciated like a fine work of visual art."

“A lovely work of fiction…Otto mixes the personal histories of her subjects with their camera-eye view of the world to create an intriguing narrative.”

“A tour de force. This exquisitely written novel-as-linked-stories is an impressive ode to feminism. Spanning several decades and various romantic settings…Otto’s novel highlights the challenges these women face as they attempt to balance career with family life. Like a master portraitist, Otto focuses on the details, describing studio settings as if she were staging a photograph herself.”

"A fascinating portrait of 20th century women exploring and establishing their artistic vision. Writing with vivid details and finely-tuned sensibility...Otto's ability to capture and corral [these women's] lives... is laudable for shedding light on this sisterhood of pioneering artists.”

"Otto is certainly [a] mistress of her craft."