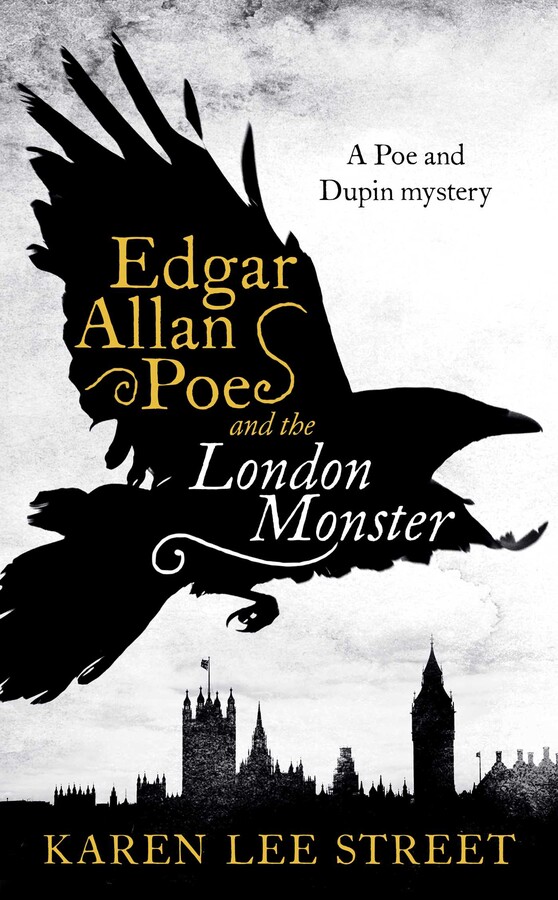 Summer, 1840. Edgar Allan Poe arrives in London to meet his friend C. Auguste Dupin, in the hope that the great detective will help him solve a family mystery. For Poe has inherited a mahogany box containing sheathes of letters that implicate his grandparents in some of London’s most heinous and scandalous crimes – those committed by the so-called London Monster who, for two years, terrorized the city’s streets, stalking attractive, well-to-do young women, slicing their clothing and their derrières.

Unable, or perhaps unwilling, to accept that his grandparents – actors who struggled to make a living on the London stage – led a clandestine and nefarious double life, Poe and Dupin set out to prove the missives forgeries. But as they delve deeper into the city’s secrets, and past horrors emerge, they start to suspect that they too are being watched and preyed upon. And if they are, might their stalkers be connected to the London Monster?

‘A superbly morbid, dark and Gothic mystery. Clever, witty, and wonderfully researched, it offers a re-imaging of the salient details of Poe’s life, and the repositioning of his relationship with his finest creation.'

‘An impressive and stylish first novel. Its inspiration is factual— its true strength is the atmospheric telling and its literary playfulness.'

'Poe narrates the story in an impressive approximation of his own rather baroque writing voice, and there are plenty of references to elements that were to subsequently appear in Poe’s fictional and poetical works. A sequel is planned to this entertaining and well-written novel.'

'Author Karen Lee Street has combined this tale with a fitting, yet, unlikely character, giving us the brilliantly dark Edgar Allan Poe and the London Monster.'

'Street leaves you itching to go back and re-read those classic Poe stories from your student days.'

'This is about the cleverest book I have ever read and I am deeply impressed, beginning with the basic concept, in which a fiction writer meets his own creation who just happens to be the first fictional detective.'

'In beautifully written and entirely believable scenes that I relished reading, Poe and Dupin face their demons, which are brought to the fore and to their ultimate, deliciously twisty conclusion. Poe fans will love the finely layered references to his most famous works. A highly enjoyable debut.'

'A bit like the newly imagined Sherlock Holmes movies: a dose of drama, a dash of darkness, and a little bit of humor ultimately liven up the journey.'

'Ms. Street does a wonderful job of channeling the voice of the Master of the Macabre. I give the book five stars.'

'Fans of Poe will, of course, love this book, and spot many references to the great man’s literary creations. Overall, a quirky, innovative and highly enjoyable book, one crying out for a sequel!'

'Poe’s devoted readers will rejoice in this debut literary novel, a skillful melding of historical detail and fiction that is also rife with Poe-like style, imagery, and plot elements. Mavens of the macabre will relish this and hunger for a sequel.'

‘Delightfully entertaining…a fascinating portrayal of London [in 1840]…with strong characterisation, a well-crafted plot and engaging dialogue’.

'Deliciously morbid…The prose has a lush, sumptuous rhythm to it…Street is fully in control of her material and the sheer exuberance of her writing ensures that the story never once tips over into parody or pastiche…This is a dark, highly satisfying mystery combining beautiful writing with suspense and unease.'