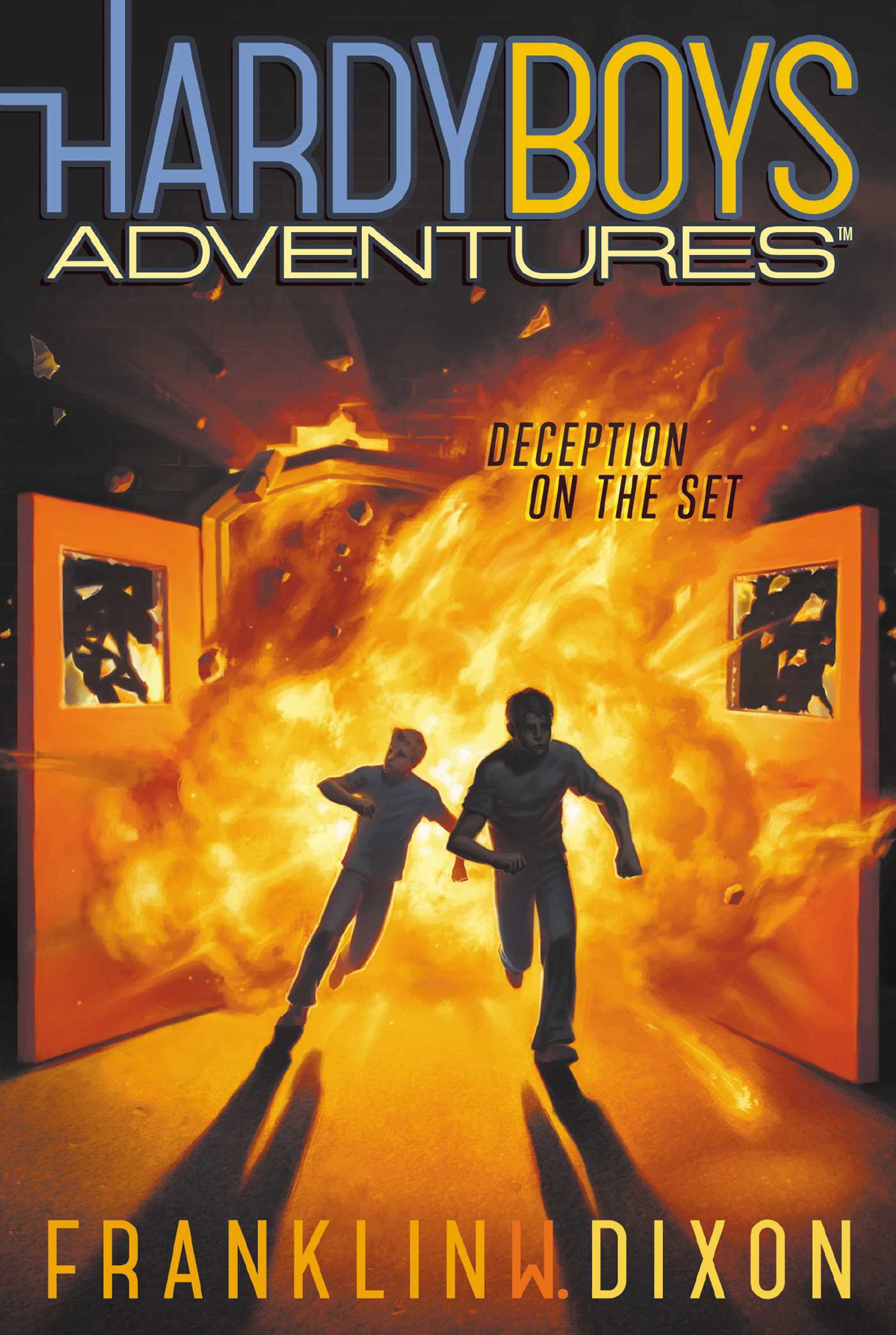 Deception on the Set

It’s lights, camera, disaster for a film crew unless Frank and Joe can track down a saboteur in this cinematic Hardy Boys adventure—a fresh approach to a classic series.

Joe and Frank Hardy are excited to be cast as extras in the zombie movie that’s filming in their hometown. Not only is film production way more exciting than what usually goes on in Bayport, it also doesn’t hurt that the lead actress is pretty cute.

At first it seems like for once Frank and Joe might not have a mystery to solve. But when a stunt goes horribly wrong, the Hardy boys know someone is trying to sabotage the film—and putting lives in jeopardy. Can the brothers find the culprit before it’s too late?

Deception on the Set NARROW ESCAPE 1 FRANK
I TRUDGED FORWARD AS BAYPORT burned around me. Draped in tattered clothing, I was part of a long line of refugees who looked beaten and hopeless shuffling through the destruction. I felt the heat from flames erupting from storefront windows. Blackened and wrecked vehicles littered the street and sidewalks. The dreary procession veered around a smoldering upturned delivery truck in the middle of the boulevard.

I couldn’t believe how my once-beautiful downtown Bayport had been transformed into a postapocalyptic wasteland. Just a week ago, everything was normal. Winslow Pharmacy’s huge plate-glass windows were intact instead of in shattered pieces all over the sidewalk. The Dollar Hut was full of shoppers and without flames erupting from the front doors. Sickly sweet instrumental music filled the air in Sal’s Diner rather than the buzzing of downed electrical wires. All this mayhem happened in just a short week. Right after they came to town.

“Unreal,” whispered my brother, Joe, as he lumbered along next to me. His blond hair was almost black, and his face was covered in soot and ash. Like everyone else, Joe wore ripped, threadbare clothing. “I never thought I’d see Bayport like this.”

“No kidding,” I murmured.

I glanced around at the long line of refugees, many of whom I knew. I spotted some of my classmates and friends, including Eric Watts, Amanda Paul, and Hector Cruz. Even my chemistry teacher, Mr. Watson, wore a torn and stained blue blazer. Mrs. Sally Gertz, owner of Sal’s Diner, didn’t even look up as she passed her smoking restaurant.

All of a sudden we heard a scream.

Something was happening at the back of the procession. Then, another scream. This one was closer. Everyone picked up the pace. I looked back to see a commotion in the distance. The people at the end of the line were pushing forward, running from something.

“You think we’ll see them from here?” asked Joe.

“I don’t know,” I replied. My stomach knotted with excitement. I knew I was supposed to be frightened, but part of me wanted to see our pursuers, couldn’t wait to catch a glimpse of them.

More screams, even closer. The sounds of terror were mixed with primal grunts and growls. Everyone around me moved faster, and I found I had to jog to keep up with the pack. Yet I couldn’t help glancing over my shoulder for a glimpse of the creatures terrorizing them. Terrorizing us!

This time I caught flashes of them. Not so far behind us I saw biting teeth and skeletal claws swiping at the crowd. It was a good thing I looked back.

“Oh!” cried Mrs. Gertz as she stumbled and fell to the ground.

I spun around and pushed against the charge of frightened people. All the while the screams and growls grew louder. When I reached Mrs. Gertz, I slipped behind her to shield her from the oncoming crowd. The screams surrounded us, and the rush tripled to a panicked stampede. Grabbing her arms, I helped the woman to her feet.

“Thank you, Frank,” she said with a smile. Then her eyes focused on something over my left shoulder. She shrieked and then dashed into the raging river of refugees.

Something clamped onto my left shoulder. I spun around to find myself face-to-decomposing-face with . . . a zombie!

Milky-white eyes stared back at me through pronounced eye sockets. Gray skin stretched over bony cheekbones and pulled away from grinning yellow teeth. Black liquid oozed over its bottom lip as its mouth opened wide, ready to take a bite.

I felt another one grasp my right arm. It jerked me away just as the first undead creature lunged forward. I stumbled away from the first zombie and spun to confront the second. But luckily, it wasn’t a zombie—just Joe.

“You want to be a zombie snack?” asked Joe.

I stumbled into a run as Joe and I followed the fleeing refugees. A glance back showed a horde of the undead in pursuit. They moved faster than I expected; a few almost kept pace with the escaping mass of Bayport citizens.

This was amazing! Despite the chaos, I couldn’t help smiling with delight.

A loud burst of static filled the air. It was followed by a tinny voice amplified over an electronic megaphone.

Deception on the Set