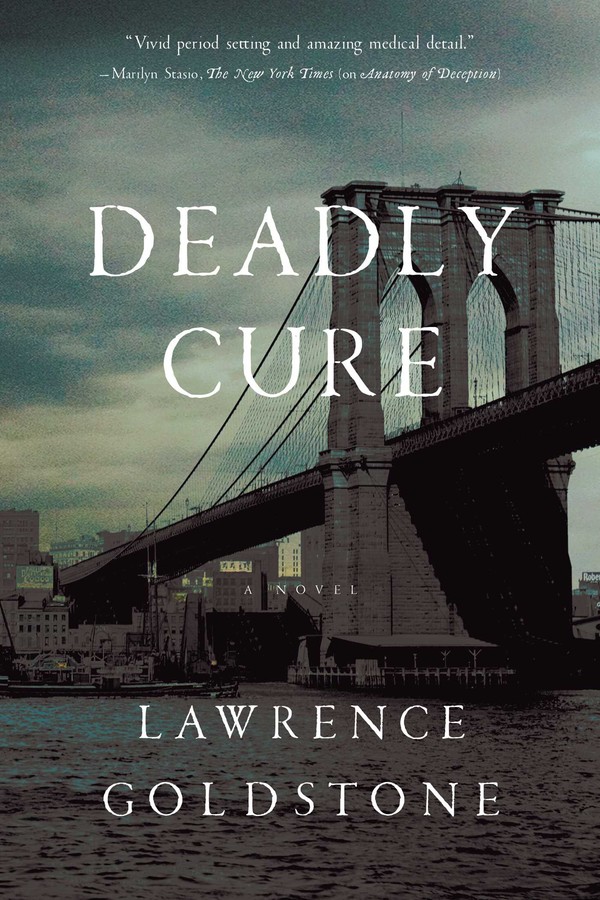 In 1899, in Brooklyn, New York, Dr. Noah Whitestone is called urgently to his wealthy neighbor’s house to treat a five-year-old boy with a shocking set of symptoms. When the child dies suddenly later that night, Noah is accused by the boy’s regular physician—the powerful and politically connected Dr. Arnold Frias—of prescribing a lethal dose of laudanum.

To prove his innocence, Noah must investigate the murder—for it must be murder—and confront the man whom he is convinced is the real killer. His investigation leads him to a reporter for a muckraking magazine and a beautiful radical editor who are convinced that a secret, experimental drug from Germany has caused the death of at least five local children, and possibly many more. Noah is drawn into a dangerous world of drugs, criminals, and politics, which threatens not just his career but also his life.

Goldstone weaves a savvy tale of intrigue and stunning twists that incorporates real-life historical figures and events while richly recreating the closing days of the nineteenth century—a time when American might was on the march in the Pacific, medicine was poised to leap into a new era, radical politics threatened the status quo, and the role of women in American society was undergoing profound change.

Lawrence Goldstone is the author or co-author of more that a dozen books, and has written for the Wall Street Journal, Los Angeles Times, Boston Globe, New Republic, Chicago Tribune, and Miami Herald. He and his wife, author Nancy Goldstone, live in Sagaponack, New York.

"Goldstone presents a chilling account of the deadly respiratory diseases (and even deadlier medical treatments) that are claiming the lives of Brooklyn children during the hard winter of 1899...not even New York's governor, Theodore Roosevelt, has the clout to rein in 'the vast web of corruption in our pharmaceutical industry' that has cost so many lives and introduced the world to some killer drugs."

"Goldstone weaves a savvy tale of intrigue and stunning twists that incorporates real-life historical figures and events into the action while richly recreating the closing days of the nineteenth century."

"A fascinating perspective on the introduction and misuse of patent medicines, this puzzler makes a forceful statement against the kinds of drugs that are still a problem today. With strong female characters, twisted bad guys, and a suspenseful, fast-moving plot, this immensely readable historical mystery compares well with Anne Perry’s A Sunless Sea and E. S. Thomson’s Beloved Poison."

"Set in New York City in 1899, this exceptional thriller from Goldstone exposes the underside of American medicine at that time. Goldstone again blends fact and fiction seamlessly."

"Known for his mysteries, Goldstone provides extensive medical knowledge in his writing. Fascinating. If you like to be immersed in a good mystery, you will enjoy this novel."

"A clever and entertaining tale. Set in the surgical theaters and medical research halls of late-19th century Philadelphia and Baltimore."

"You’ll be gripped by this haunting and atmospheric thriller. "