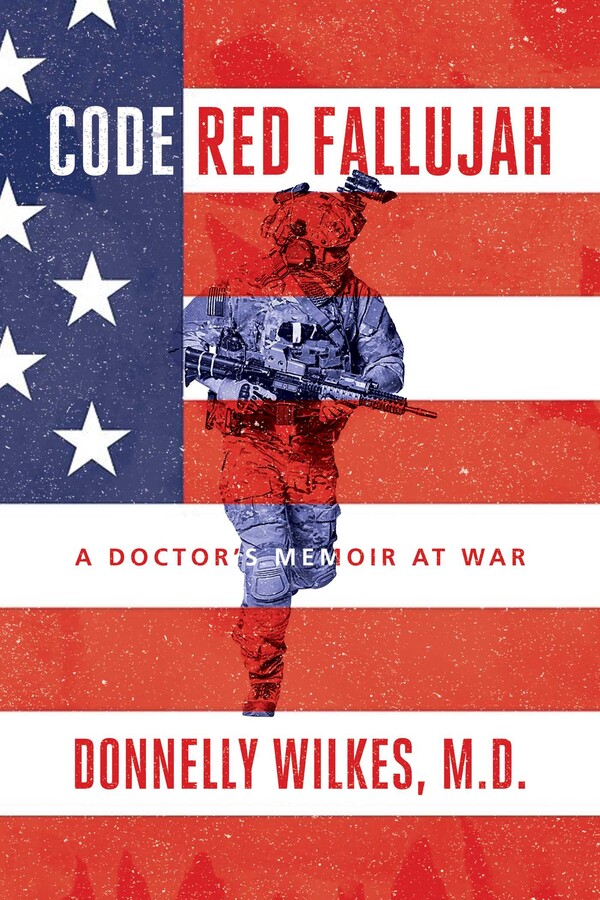 A Doctor's Memoir at War

Airstrikes rain down, Gatling guns pound, and snipers lurk in the distance—welcome to the combat aid station of a young doctor embedded with the heavily weaponized 1st Marines Division as the Battle of Fallujah boils over.

On the night of April 4th, 2004, 1st Marine Expeditionary Forces launch a major assault on the city of Fallujah. U.S. Navy Lieutenant Donnelly Wilkes’s battalion leads the assault into Fallujah as he is positioned with Navy Corpsmen and Marines at the tactical highway intersection called “The Cloverleaf.” Rarely have U.S. military physicians been so close to combat in a major conflict as they were in the chaotic, embattled streets of Fallujah—Code Red Fallujah will take you there.

Sharing the harrowing entries from his field diary, Wilkes becomes the first-ever Navy physician to recount the sights and sounds of one of the most violent events of the entire Iraq War. In heart-pounding detail, he divulges his struggles to save wounded warriors amidst rockets landing close enough to knock him off his feet. When Wilkes—fresh out of medical school—is suddenly thrust into this war zone, his skills, his faith, and his ability to endure are all put to the test. Code Red Fallujah is the firsthand narrative of Wilkes’s role in the Battle of Fallujah, scintillating combat trauma, and the spiritual challenges that pierced his journey.

Donnelly Wilkes, M.D. is a California native. He is board-certified by the American Board of Family Medicine. Dr. Wilkes obtained his bachelor’s degree from the University of California, Irvine, and his medical degree from Tulane School of Medicine on a full Navy Scholarship. Following medical school, Wilkes was commissioned in the U.S. Navy, completed residency training in family medicine at the Naval Hospital Camp Pendleton, and served seven years on active duty. Wilkes served two combat tours in Iraq in 2004 and 2008 and was awarded the Navy Commendation Medal with Valor for his actions in the battle of Fallujah in April of 2004. He finished his Naval career as the Senior Medical Officer at Port Hueneme Naval Clinic, where he was responsible for the medical oversight of active duty members, their families, and local Veterans. Upon completion of his Naval service, Dr. Wilkes was honorably discharged as a Lieutenant Commander and opened Wilkes Family Medicine in August of 2009. He is now the president and medical director of Summit Health Group in Thousand Oaks, California. Dr. Wilkes is a devoted husband, father, and Christian.

"In the summer of 2008, while on a USO tour in Iraq to visit our troops, I met Lieutenant Commander Donnelly Wilkes. He was serving as a doctor with the US Navy supporting US Marines stationed in Al-Qa'im, near the Syrian border. This was his second deployment. His first was in 2004, attached to the 1st Marine Division during the battle of Fallujah. In our conversation at Al-Qa'im, it turned out we lived in the same area in California, and years later, we would bump into each other at a local restaurant. That night he reminded me that we had met in Iraq and I thanked him for serving in the Navy. Now he has written Code Red Fallujah, a memoir of his days in the service, centering on one of the most violent battles of the Iraq war—the first of two battles for Fallujah. His faith is tested, his skills as a physician are tested, his family is tested, and his love for the Marines he served with is clear and deep and 'Always Faithful.' A powerful story based on his diaries from the front, I am thankful to support this wonderful book and applaud him for telling his story."

"Stripped bare of veneer, out of the toughest fighting in Iraq, comes this moving narrative of a Navy doctor caught up in the battle of Fallujah. Assigned to a front-line Marine infantry battalion, Wilkes's account reveals the human side of being tested by the rigors of war. Read this to understand the sacrifices of America's warriors when called to stand and deliver."

"I was a teenager during the time of the Vietnam conflict, and only due to the fact that I had a high draft number during the lottery back then did I escape the all too real possibility that I would have ended up involved in that conflict. The awareness of that is largely responsible for why I am involved with veteran causes to the extent I am, which includes nineteen years hosting the National Memorial Day Concert in our nation's capital. I do this to honor the heroics of the men and women throughout our nation's history who have taken it upon themselves to serve our country, regardless of sacrifice to life and limb. Dr. Donnelly Wilkes is one such individual, and Code Red Fallujah is a vivid recount of what the sacrifices are that our men and women of the military have made and continue to make on our behalf. The recount of his experiences during this country's conflict in the Middle East is a powerful reminder of how much we owe to those who have taken on the task as defenders of not just our country, but the hopes and dreams of freedom-loving people everywhere."

"As a twenty-three-year Marine Corps veteran, I'm proud to endorse this work. Code Red Fallujah transports you back to a time when so many Americans, still reeling from the aftermath of 9/11, felt the call to action—to take on something larger than themselves. As this book unfolds, you'll experience the adventure and chaos Lieutenant Wilkes and his battalion faced in Fallujah. Intertwined with combat action, spiritual challenges, and medical drama—Code Red Fallujah is a must read. Dr. Wilkes is still taking care of Marines today...me specifically...he's my doctor! 'Thanks Doc!'"

A Doctor's Memoir at War