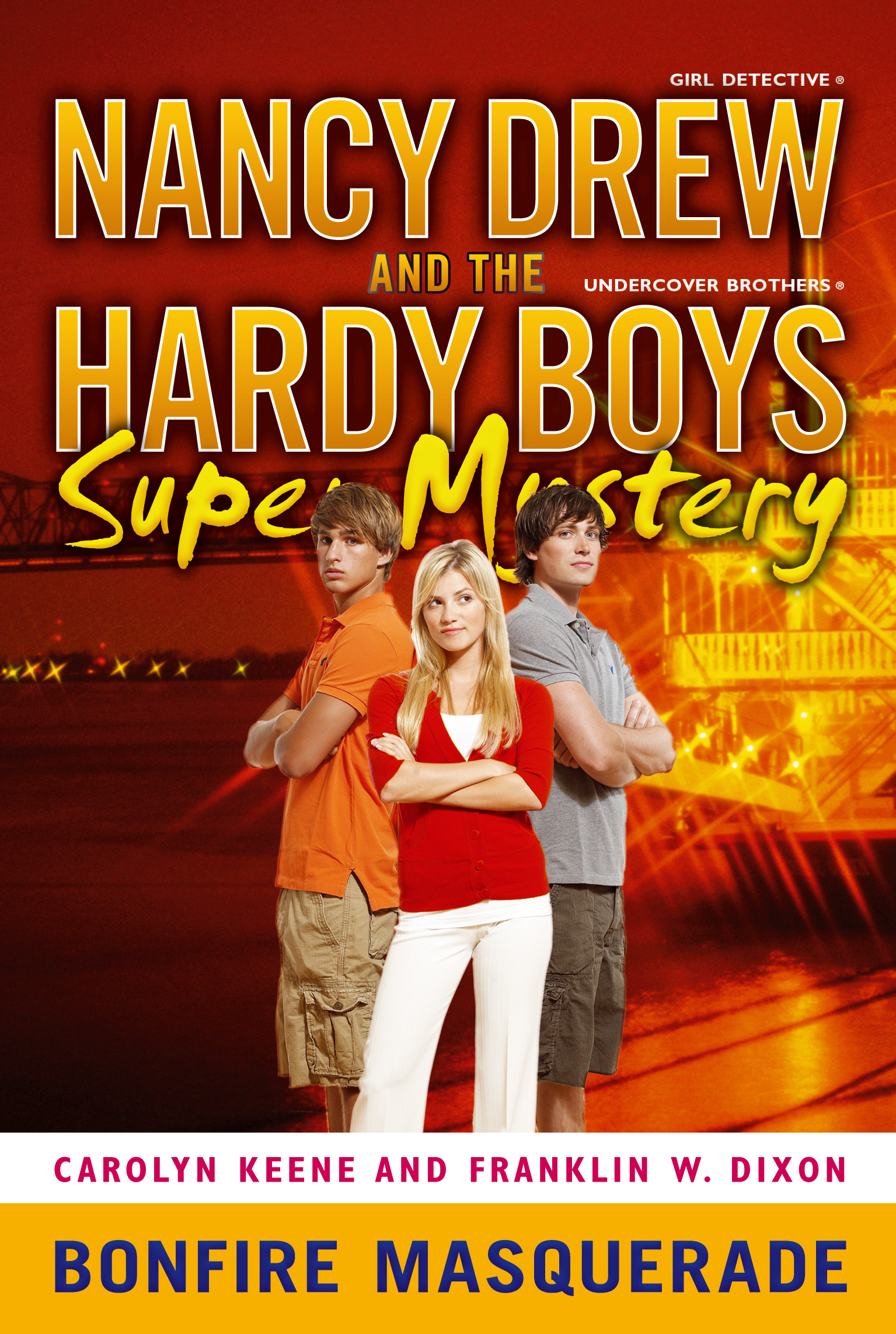 Nancy Drew and her friends are going to New Orleans for a vacation -- she even promises not to solve any mysteries while she's down there! But, when she runs into Frank and Joe Hardy, there can't be a mystery too far away. Nancy and the Hardys begin to investigate a crooked real estate scheme admist the glitz and splendor of New Orleans during party season. Throw in a dead body and intrigue, and there's no time for a vacation.

NANCY SHOP TILL YOU DROP

I watched as the couple drew closer and closer to my position. They were smooth, I had to give them that. They were young and beautiful and well-dressed. They were chatting and laughing as they walked, carrying big shopping bags. They had no idea what they were in for.

This was going to be fun.

“Hi!” I said loudly as I leaped out in front of them. “Can I help you with anything?”

They both jumped a little. I was standing way too close to them, and they stepped backward. The smile on my face grew even wider.

“No thank you, uhh …” The woman leaned forward to read my name tag. “Nancy. No thank you, Nancy. I think we’re good.”

She took the man’s hand. They smiled at me, clearly expecting me to move out of their way. I stayed right where I was. After an awkward moment, they tried to go around me. At the last minute, I stepped in front of them again.

“Are you sure?” I asked in my perkiest voice. “I think this dress would look really great on you.”

I held up a sky blue silk dress. It was actually my favorite thing in the store—blue being my favorite color. The skirt was delicately ruched, and the neckline was trimmed in beautiful lace. It would have looked great on anyone.

The woman smiled at me again, although this time, it seemed a little forced.

Her voice was still upbeat, but it was cold and steely now too. It was hard for me to keep from laughing.

“What about these?” I pulled a pair of men’s oxblood leather shoes from off a nearby counter. “Sir?”

“Not interested,” he said. He didn’t even bother looking at them. He ran a nervous hand through his hair. “We’re just browsing. And actually, I think the money is about to run out on our meter, and we need to be leaving. Right, honey?”

The woman nodded, and they slipped past me. Now they were moving at a quicker pace. They’d stopped laughing. The chase was on.

I tugged at the collar of my salesgirl uniform and pulled the name tag closer to my mouth.

I counted to five and then walked slowly after the couple, hiding behind racks of clothes but keeping them in sight as they made their way through the store. Everything and More was River Heights’s biggest, fanciest, and most expensive department store. On any given day, it had hundreds of shoppers. And today, it had two very special visitors: Shiloh and Ian Frommer, the brother-and-sister shoplifting team that had been on a two-year, multistate shoplifting spree. They often impersonated a soon-to-be-married couple, looking for things for their registry, which was the story they’d given Everything and More. It’d been estimated they’d stolen over two million dollars’ worth of merchandise.

And all of that was about to end, right here, right now.

Shiloh and Ian were making a beeline for the exit that led straight to the mall parking lot. Even if they got out, it wouldn’t do them much good—George had disabled their car’s engine. But I doubted they were going to get out the door. Especially because they were about to walk right past the cosmetics counter.

“Hi!” yelled Bess, way too loudly, as she emerged from behind the counter. Shiloh nearly screamed. Ian flinched. Bess smiled.

“Can I interest you in our latest fragrance? It’s called Stolen.”

Both Ian and Shiloh opened their mouths to say something, but before they could respond, Bess had sprayed them with perfume. From this angle, it looked as though it had gone right in their faces.

Ian inhaled sharply, and started coughing and hacking. Shiloh was frantically rubbing her eyes with her fists. Tears were streaming down their cheeks. I had to cover my mouth to keep from laughing out loud.

“I am so sorry,” said Bess in her sweetest, fakest voice. “Here, let me help you with those.”

Bess reached out to take one of the shopping bags from Ian.

“No!” he barked, setting off a fresh round of coughing. He pulled away from Bess. “We’re fine.”

Still unable to breathe properly, Ian and Shiloh power walked away from Bess. They were desperate now. They knew something was up.

“Aaand it’s your turn, George,” I said into my name tag mic.

I could see the hope in Shiloh’s and Ian’s faces as they neared the exit. It almost looked like they were going to get out. Almost.

George stepped in front of the exit, dressed in a one piece janitor’s uniform. Behind her, she pulled a mop and bucket. Whistling, she ran the mop over the tiled floor in a few quick strokes.

“Out of our way!” hissed Ian. George stepped aside politely, and Ian and Shiloh stomped right past her. Or at least, they tried to. Ian’s feet flew out from underneath him, just like a cartoon character stepping on a banana. Shiloh slid and skidded, her arms windmilling, bags flying everywhere.

She went down like a ton of bricks. They tried to get up, but neither could gain any traction. Ian began crawling away. The automatic doors opened in front of him. It looked like he was going to get away.

“I don’t think so,” said George. She pushed a button on her lapel mic, and the doors slammed shut.

“What is this?” said Shiloh, lifting her hand off the floor. Something shimmered on her palm. Suddenly her other hand shot out from beneath her, and her head hit the floor.

“Oops,” said George. “Did I fill my bucket with oil instead of water? My bad!” She laughed.

I walked over and looked down at Shiloh and Ian trying to get up.

Bess, George, and I began picking up the bags, as well as the many stolen items that had gone flying out of them when Shiloh and Ian fell. I found six MP3 players, a dozen necklaces, three expensive suede wallets, two watches—and the very same dress I had recommended!

“My, my, my,” said Bess. “Quite the shopping spree you two have been on.” She was holding up two purses, full of other people’s stuff. Looked like they’d been practicing a little pickpocketing to go with their shoplifting.

“All right, Chief, we’ve got them with the merchandise,” I said, leaning into my name tag microphone. Chief McGinnis was waiting for my word to send in his men.

I looked down at Shiloh and Ian, then put my hand to my chin, considering.

“You know, I have something else that I think might look great on both of you.” I pulled out two pairs of handcuffs and snapped them on their wrists. “And look, they’re a perfect fit!”

Bess laughed. She picked up the dress I’d shown the couple earlier. She held it against me and looked appraisingly.

“This would look great on you,” she said. “You think they’ll let us keep some stuff as a reward for a job well done?”

George and I both laughed. Bess had an eye for clothes that we could appreciate, but didn’t always share.

I saw flashing blue and red lights and heard an approaching police siren. Chief McGinnis and his men were always great to have around once George, Bess, and I had solved the real problems. Before that, they usually just got in the way.

“Are these our shoplifters?” Chief McGinnis asked. “Yup,” I said. “We even gift wrapped them for you.” I pointed to the handcuffs.

Once everything was squared away with Chief McGinnis (Bess got the dress), we all hopped in my car and headed back to my place.

“Let’s get some sushi!” said George as we drove. Crime fighting is hungry work, and Taste of Tokyo was right on the way. After loading up on sushi, sashimi, and miso soup, we finally made it back to my house and set up camp in the living room to talk over the details of the case.

“Yeah!” agreed Bess. “And when you remote-controlled the automatic doors closed? Priceless!” She leaped up and did a great impression of Ian Frommer slipping in the oil.

“Hello!” Dad’s voice came from his office. I’d heard him on the phone when we came in. His voice was quiet and clipped, the way it was when he was working on a serious case.

Dad laughed to himself. Sometimes my cases made him worry, but I knew he was proud of the work that I did.

“Look, Nancy, I’ve got an important case coming up. Do you remember my friend Daniel Brumfield?”

“He’s a friend of mine from college, lives down in New Orleans. You met him a long time ago. Anyway, he just called me and said he needs some help. A warehouse of his was burned down, and on top of figuring out who did it, and going through the insurance paperwork, he’s having a hard time deciding whether or not to sell the property.”

A mysterious fire? My Spidey sense was tingling already.

Dad ran his hand through his hair. “And Hannah asked for the week off, since it’s her birthday. And I don’t think it’s a good idea to leave you here alone—who knows what kind of trouble you might get into.”

Normally I’d bristle at that remark, but I already had an idea of what kind of trouble I was going to be getting into in New Orleans, and I was looking forward to it.

“Plus, it’s Mardi Gras, so I trust you’ll have a way to amuse yourself.”

“Ahem.” Bess stood up. Her face was very serious. “Mr. Drew, I know that you would never presume to ask George and me for such a big favor, but I want you to know that we are coming with you. To keep Nancy occupied, of course, so you can get your work done.”

Dad’s lips twitched into a smile. He opened his mouth, but Bess held up her hand.

“Well, I appreciate the sacrifice, girls. You really are the best.” He reached into the breast pocket of his jacket and pulled out some folded papers. “I already bought you both tickets. Here are the itineraries.”

“Woo-hoo!” George and Bess whooped at the same time.