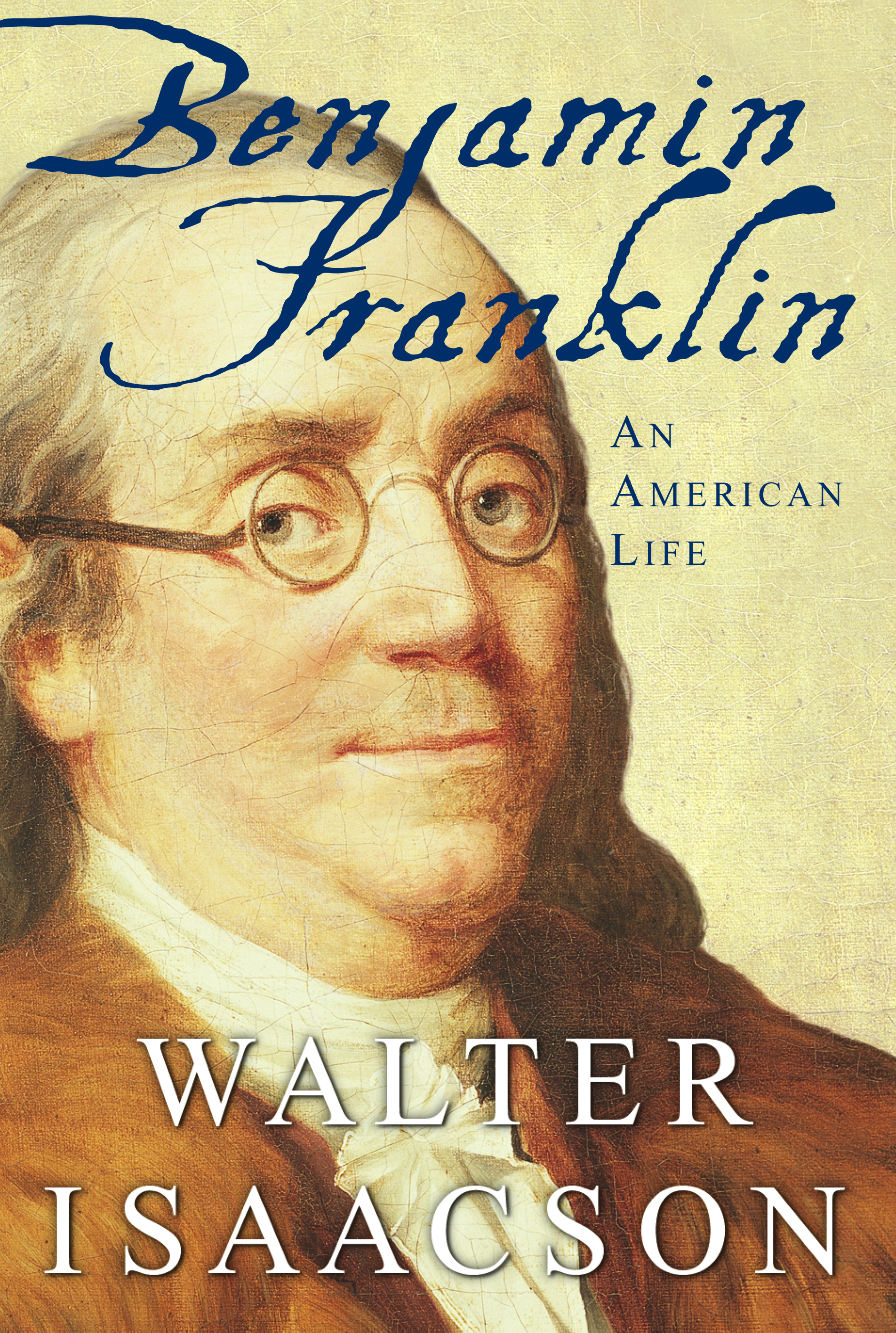 In this authoritative and engrossing full-scale biography, Walter Isaacson, bestselling author of Einstein and Steve Jobs, shows how the most fascinating of America's founders helped define our national character.

Benjamin Franklin is the founding father who winks at us, the one who seems made of flesh rather than marble. In a sweeping narrative that follows Franklin’s life from Boston to Philadelphia to London and Paris and back, Walter Isaacson chronicles the adventures of the runaway apprentice who became, over the course of his eighty-four-year life, America’s best writer, inventor, media baron, scientist, diplomat, and business strategist, as well as one of its most practical and ingenious political leaders. He explores the wit behind Poor Richard’s Almanac and the wisdom behind the Declaration of Independence, the new nation’s alliance with France, the treaty that ended the Revolution, and the compromises that created a near-perfect Constitution.

In this colorful and intimate narrative, Isaacson provides the full sweep of Franklin’s amazing life, showing how he helped to forge the American national identity and why he has a particular resonance in the twenty-first century.

Chapter One: Benjamin Franklin and the Invention of America

His arrival in Philadelphia is one of the most famous scenes in autobiographical literature: the bedraggled 17-year-old runaway, cheeky yet with a pretense of humility, straggling off the boat and buying three puffy rolls as he wanders up Market Street. But wait a minute. There's something more. Peel back a layer and we can see him as a 65-year-old wry observer, sitting in an English country house, writing this scene, pretending it's part of a letter to his son, an illegitimate son who has become a royal governor with aristocratic pretensions and needs to be reminded of his humble roots.

A careful look at the manuscript peels back yet another layer. Inserted into the sentence about his pilgrim's progress up Market Street is a phrase, written in the margin, in which he notes that he passed by the house of his future wife, Deborah Read, and that "she, standing at the door, saw me and thought I made, as I certainly did, a most awkward ridiculous appearance." So here we have, in a brief paragraph, the multilayered character known so fondly to his author as Benjamin Franklin: as a young man, then seen through the eyes of his older self, and then through the memories later recounted by his wife. It's all topped off with the old man's deft little affirmation -- "as I certainly did" -- in which his self-deprecation barely cloaks the pride he felt regarding his remarkable rise in the world.

Benjamin Franklin is the founding father who winks at us. George Washington's colleagues found it hard to imagine touching the austere general on the shoulder, and we would find it even more so today. Jefferson and Adams are just as intimidating. But Ben Franklin, that ambitious urban entrepreneur, seems made of flesh rather than of marble, addressable by nickname, and he turns to us from history's stage with eyes that twinkle from behind those newfangled spectacles. He speaks to us, through his letters and hoaxes and autobiography, not with orotund rhetoric but with a chattiness and clever irony that is very contemporary, sometimes unnervingly so. We see his reflection in our own time.

He was, during his eighty-four-year-long life, America's best scientist, inventor, diplomat, writer, and business strategist, and he was also one of its most practical, though not most profound, political thinkers. He proved by flying a kite that lightning was electricity, and he invented a rod to tame it. He devised bifocal glasses and clean-burning stoves, charts of the Gulf Stream and theories about the contagious nature of the common cold. He launched various civic improvement schemes, such as a lending library, college, volunteer fire corps, insurance association, and matching grant fund-raiser. He helped invent America's unique style of homespun humor and philosophical pragmatism. In foreign policy, he created an approach that wove together idealism with balance-of-power realism. And in politics, he proposed seminal plans for uniting the colonies and creating a federal model for a national government.

But the most interesting thing that Franklin invented, and continually reinvented, was himself. America's first great publicist, he was, in his life and in his writings, consciously trying to create a new American archetype. In the process, he carefully crafted his own persona, portrayed it in public, and polished it for posterity.

Partly, it was a matter of image. As a young printer in Philadelphia, he carted rolls of paper through the streets to give the appearance of being industrious. As an old diplomat in France, he wore a fur cap to portray the role of backwoods sage. In between, he created an image for himself as a simple yet striving tradesman, assiduously honing the virtues -- diligence, frugality, honesty -- of a good shopkeeper and beneficent member of his community.

But the image he created was rooted in reality. Born and bred a member of the leather-aproned class, Franklin was, at least for most of his life, more comfortable with artisans and thinkers than with the established elite, and he was allergic to the pomp and perks of a hereditary aristocracy. Throughout his life he would refer to himself as

From these attitudes sprang what may be Franklin's most important vision: an American national identity based on the virtues and values of its middle class. Instinctively more comfortable with democracy than were some of his fellow founders, and devoid of the snobbery that later critics would feel toward his own shopkeeping values, he had faith in the wisdom of the common man and felt that a new nation would draw its strength from what he called "the middling people." Through his self-improvement tips for cultivating personal virtues and his civic-improvement schemes for furthering the common good, he helped to create, and to celebrate, a new ruling class of ordinary citizens.

The complex interplay among various facets of Franklin's character -- his ingenuity and unreflective wisdom, his Protestant ethic divorced from dogma, the principles he held firm and those he was willing to compromise -- means that each new look at him reflects and refracts the nation's changing values. He has been vilified in romantic periods and lionized in entrepreneurial ones. Each era appraises him anew, and in doing so reveals some assessments of itself.

Franklin has a particular resonance in twenty-first-century America. A successful publisher and consummate networker with an inventive curiosity, he would have felt right at home in the information revolution, and his unabashed striving to be part of an upwardly mobile meritocracy made him, in social critic David Brooks's phrase, "our founding Yuppie." We can easily imagine having a beer with him after work, showing him how to use the latest digital device, sharing the business plan for a new venture, and discussing the most recent political scandals or policy ideas. He would laugh at the latest joke about a priest and a rabbi, or about a farmer's daughter. We would admire both his earnestness and his self-aware irony. And we would relate to the way he tried to balance, sometimes uneasily, the pursuit of reputation, wealth, earthly virtues, and spiritual values.

Some who see the reflection of Franklin in the world today fret about a shallowness of soul and a spiritual complacency that seem to permeate a culture of materialism. They say that he teaches us how to live a practical and pecuniary life, but not an exalted existence. Others see the same reflection and admire the basic middle-class values and democratic sentiments that now seem under assault from elitists, radicals, reactionaries, and other bashers of the bourgeoisie. They regard Franklin as an exemplar of the personal character and civic virtue that are too often missing in modern America.

Much of the admiration is warranted, and so too are some of the qualms. But the lessons from Franklin's life are more complex than those usually drawn by either his fans or his foes. Both sides too often confuse him with the striving pilgrim he portrayed in his autobiography. They mistake his genial moral maxims for the fundamental faiths that motivated his actions.

His morality was built on a sincere belief in leading a virtuous life, serving the country he loved, and hoping to achieve salvation through good works. That led him to make the link between private virtue and civic virtue, and to suspect, based on the meager evidence he could muster about God's will, that these earthly virtues were linked to heavenly ones as well. As he put it in the motto for the library he founded, "To pour forth benefits for the common good is divine." In comparison to contemporaries such as Jonathan Edwards, who believed that men were sinners in the hands of an angry God and that salvation could come through grace alone, this outlook might seem somewhat complacent. In some ways it was, but it was also genuine.

Whatever view one takes, it is useful to engage anew with Franklin, for in doing so we are grappling with a fundamental issue: How does one live a life that is useful, virtuous, worthy, moral, and spiritually meaningful? For that matter, which of these attributes is most important? These are questions just as vital for a self-satisfied age as they were for a revolutionary one. 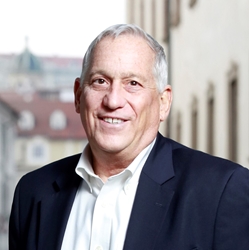 Walter Isaacson, University Professor of History at Tulane, has been CEO of the Aspen Institute, chairman of CNN, and editor of Time magazine. He is the author of Leonardo da Vinci; The Innovators; Steve Jobs; Einstein: His Life and Universe; Benjamin Franklin: An American Life; and Kissinger: A Biography, and the coauthor of The Wise Men: Six Friends and the World They Made. Facebook: Walter Isaacson, Twitter: @WalterIsaacson