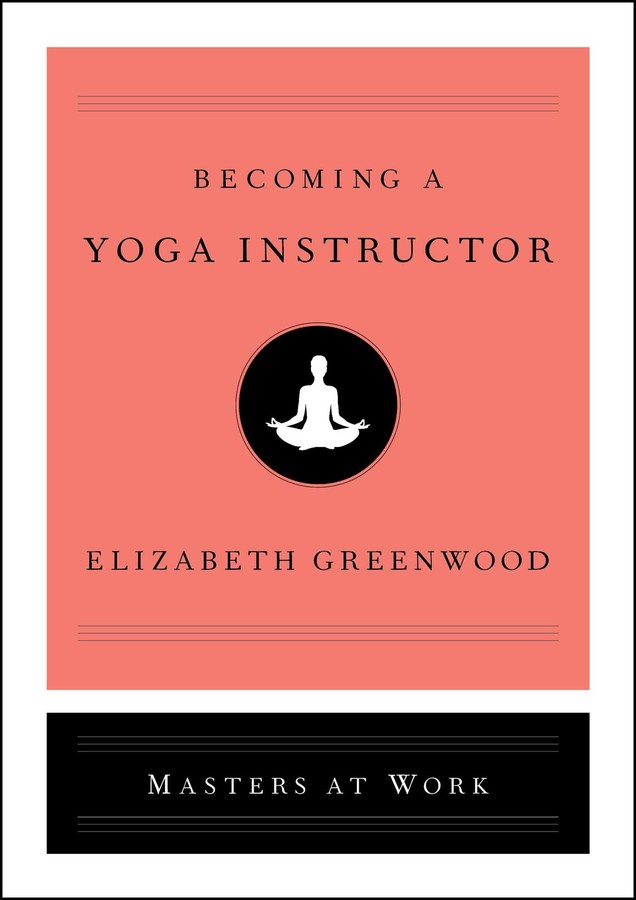 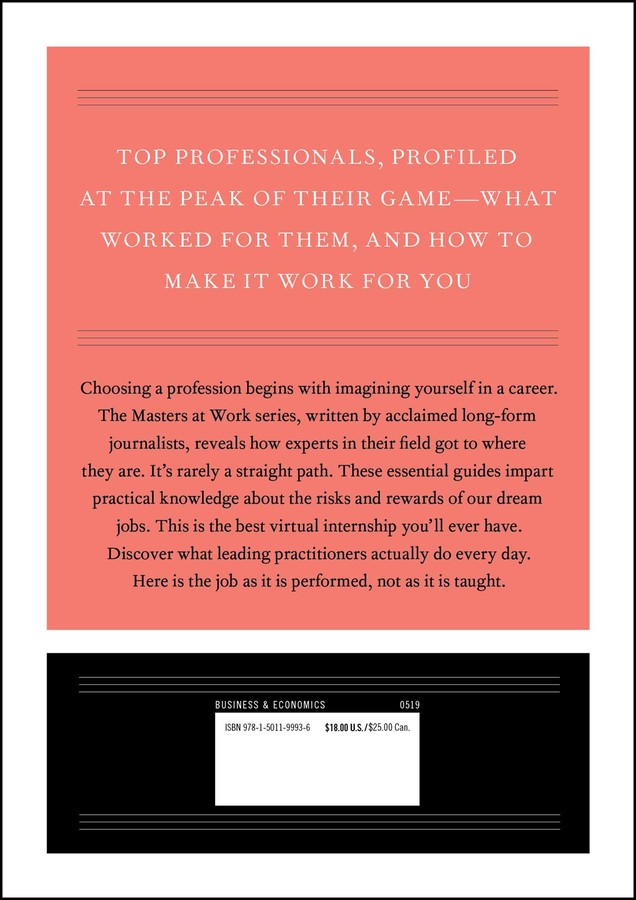 The must-have book for any yogi or yogini who’s curious about taking the next step and becoming a yoga instructor.

Choosing a profession begins with imagining yourself in a career. Whether you see yoga as a side gig or your life calling, Becoming a Yoga Instructor is the perfect resource to help you figure out how to get there—and what it’ll really be like once you do.

Journalist Elizabeth Greenwood has been practicing yoga for over twenty years. Now, she takes you along as she studies with teachers across the country to figure out how these women and men rose to the top of their profession—and how they stay there. In these pages, you’ll take a private lesson with Abbie Galvin, a rock star instructor whom other yoga teachers fly around the world to learn from. You’ll visit a small business owner as she opens up her very first studio, and meet newbies hustling as they figure out how to stand out from the competition, whether by leading yoga retreats to Costa Rica, helping veterans struggling with PTSD, or teaching classes over YouTube.

Bursting with inside information about the yoga industry, and the spiritual, physical, and psychological benefits that daily practice can bring to your life, Becoming a Yoga Instructor is a perfect virtual internship for anyone contemplating turning their love of yoga into a career.

Becoming a Yoga Instructor 1
On a Friday morning in late winter, New Yorkers are fighting the remnants of yet another surprise storm. Trains are delayed, puddles of slush surpass ankles, and umbrellas flip inside out. Yet climbing up the narrow and uneven staircase to a second-floor yoga studio in a former factory building in the Bowery, a loft where Keith Richards once lived, the unpleasantness of the journey is alleviated by the arrival. Inside the airy space, a gray light filters in from three tall windows looking out onto a strip of boulevard, once home to drunks and derelicts, that today boasts athleisure boutiques, juice shops, an upscale organic grocery store, and this establishment, with a cheeky name to acknowledge its singularity: The Studio. What sets this space apart from the innumerable yoga studios in New York City is its unique offering, Katonah yoga, which draws on Taoism and Chinese medicine, and the advanced students who call this studio home. The Studio is, as its website proudly proclaims, “where your teacher comes to practice.”

Despite the slush and snow outside, The Studio’s main teaching salon is packed cheek by jowl with students and their requisite props. A basic Katonah setup includes a mat, two blankets, a long strap for adjustments, four blocks, and a cloth sandbag for weighing down various body parts. Several people have draped themselves over folding chairs in supported backbends, blocks under their heads and their limbs trussed up, a somewhat medieval-looking arrangement reminiscent of the rack. Other students cluster in small groups to laugh and catch up, creating an atmosphere that’s more cocktail party than silent monastery.

Then Abbie Galvin enters the room. A petite sixty-three-year-old with a mop of curly brown hair highlighted with blond streaks, this unassuming yogini in Adidas wind pants and a white boatneck top is the reason the people in this room have braved the morning’s gale-force winds. She got in late last night from a training in LA, where students traveled from as far as Europe to study with her. If she’s tired or jet-lagged, she’s not showing it.

Immediately she starts making adjustments, bringing another block for a fellow who’s upside-down over a chair, and pointing students—many of whom are also Studio teaching staff—to where they can most usefully provide the many hands-on tweaks Katonah yoga is known for.

She notices a newbie, Margo, off in a corner in expensive leggings and a high ponytail—Abbie knows the hundreds of students who are regulars by name and face—and introduces herself. She asks Margo to sit with her feet together to create a diamond shape with her legs, and wraps a strap under her hips. Abbie is reading Margo’s feet, which is something like a palm reading, except where lines might indicate your longevity (or lack thereof) or love life (or lack thereof), the crests and wrinkles of the feet correspond to strengths and weaknesses in the body and their correlative spiritual attributes. The practice comes out of Taoism, but Abbie has made the ancient technique pragmatic.

Abbie translates the lines of Margo’s feet. By now, half a dozen students have gathered around. “See how the ball of the left foot is flatter than the fullness of the ball of the right foot? That means the left lung isn’t getting enough air,” Abbie says. The flatness is the result of a dip in Margo’s hip, itself the product of her organs being “collapsed,” as Abbie terms it, or not functioning at their optimal capacities.

“Ah, that makes sense,” says one of Abbie’s disciples.

Abbie continues diagnosing newbie Margo by placing a tiny foot on her sternum. The woman grows several inches: “Now this is how you plug in, how you rise up, how you put yourself in the center of yourself.”

“Everyone is off-center,” Abbie tells her, along with the several students who are now taking notes. “It’s not pejorative. If something is wrong, it’s just because you don’t know. Now you’ve got lungs, a socket, an antenna,” she says, using the metaphor-heavy language of Katonah. “You’re plugged in. Your job is to reference this idea, instead of just doing you.”

Whereas many yoga teachers will urge students to “listen to their bodies” to find shapes that feel right to them, Katonah stresses objective measurement, using props like blocks and straps to ensure limbs land where they are supposed to. “Freedom is not doing whatever the fuck you want,” Abbie says. “It’s about finding freedom within confinement. It’s about having good boundaries.”

This is all before class has officially begun.

UNLIKE MOST CLASSES, WHERE yogis line up their mats to face the teacher at the front of the room, Katonah students place their mats to face the center. The configuration creates a more communal experience, and Abbie is rarely in one spot for longer than a minute. She commences with a pose recognizable to any lay student of yoga. “Let’s get into a dog,” she says, and the room suddenly quiets. “It’s not the most interesting pose,” she acknowledges with a laugh. “Now get your ass way up!” I giggle. “Now look way out,” she continues. “That’s the way toward your future. Would you rather look at your crotch or into your future?”

Abbie guides us into a modified cat-cow stretch, a gentle undulation of the spinal column. But things get interesting when she asks us to cross our legs behind, and to begin flipping our wrists to “move currency” through the body. “Beautiful, Jonathan!” she shouts across the room to a fellow whose body type is more plumber than yogi. “So nice, Alex!” admiring the form of a Studio teacher with triceps sharp like knives.

In Abbie’s classes, students hold poses for much longer than the typical few breaths, although Abbie would likely quibble with my phrasing. “You don’t hold poses,” I hear her explain from across the room. “You move currency through forms. You orient yourself.” She urges us to find the balance between exertion and punishment: “You don’t drive until you run out of gas; you drive until you reach your destination.”

In a particularly pretzely forward fold, where we swim our arms to grab opposite ankles, a regular, Harry, shouts, “This is hard!”

“Life is hard,” Abbie claps back. “You could look a little happier!” Toward the end of class, she tells us to bring our mats to the wall to use the hard surface behind us as leverage to go deeper into a lunge known as pigeon pose. “But don’t take all day!” she shouts with a smile as we find ourselves new spots. The laughter breaks through the sound of weary breathing.

Abbie’s gift is seeing the wonkiness that resides in all bodies. She can spot a wrinkle in the neck or a torqued hip from across the room. She often demonstrates proper alignment on individuals, wrapping her ubiquitous strap around a waist and placing a foot into the crook of a hip to magically imbue the person with more inches and internal space, as a small cabal of teachers and seasoned students forms around her to watch. At one point, she walked all 105 pounds of her body up a gentleman’s back. Her classes are more of a workshop than a traditional flow, and devotees come not only to work up a sweat but to gain knowledge of her philosophy, both in theory and in how it manifests in the body.

Abbie’s microscopic attention to detail cuts both ways. Toward the class’s close, she readies us for King of the Mountain, a pose where you interlace your fingers, palms up, and hold your arms above your head for a full nine minutes with a yoga block balancing on your palms, “your crown.” I urge you to attempt this for thirty seconds. My arms go tingly in under a minute.


King of the Mountain Pose

“Liz, you have trouble keeping your arms up, right?” she shouts to me in the farthest corner of the room, where I’ve sought refuge in an attempt to hide myself from the teacher-students and their circus-like contortions. My face flushes guiltily. I’ve been practicing yoga off and on for twenty years, and like to think I know a thing or two.

She calls me over to stand against a wall, where she places three blocks behind my upper, middle, and lower back, and one between my thighs. She has another student put a block behind my head while she lies on her back driving her feet into my hips. All thirty-odd students in the class are staring at me as Abbie points out my asymmetries and the fruitless angle at which I was attempting to hold up my arms without the scaffolding she has built around me. I feel a mustache of perspiration forming on my upper lip. “Straighten your arms,” she urges me. She’s narrating for the class now: “Her lungs are starting to fill, and she’ll be able to start breathing. That’s it, right! That’s where she belongs.”

After all the blocks and feet and straps have guided me into the position in which the pose is meant to be assumed, I find I can hold my arms up effortlessly for the entire nine minutes. I feel that elusive currency I’ve heard her mention coursing through my body, as though for the first time all the organs and muscles of my body are conspiring to help rather than hurt me. When I release my arms back to their sides and shake out my legs, I feel a new lightness, a flush of energy. I can see why people get addicted to this kind of yoga. 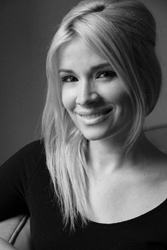 Elizabeth Greenwood teaches creative nonfiction at Columbia University. She is the author of Playing Dead: A Journey Through the World of Death Fraud and Becoming a Yoga Instructor.

More books in this series: Masters at Work