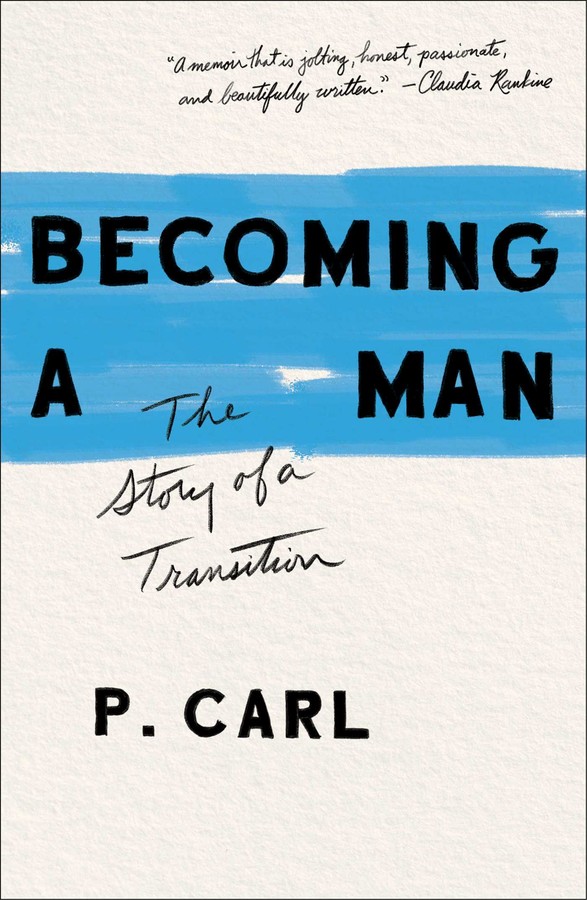 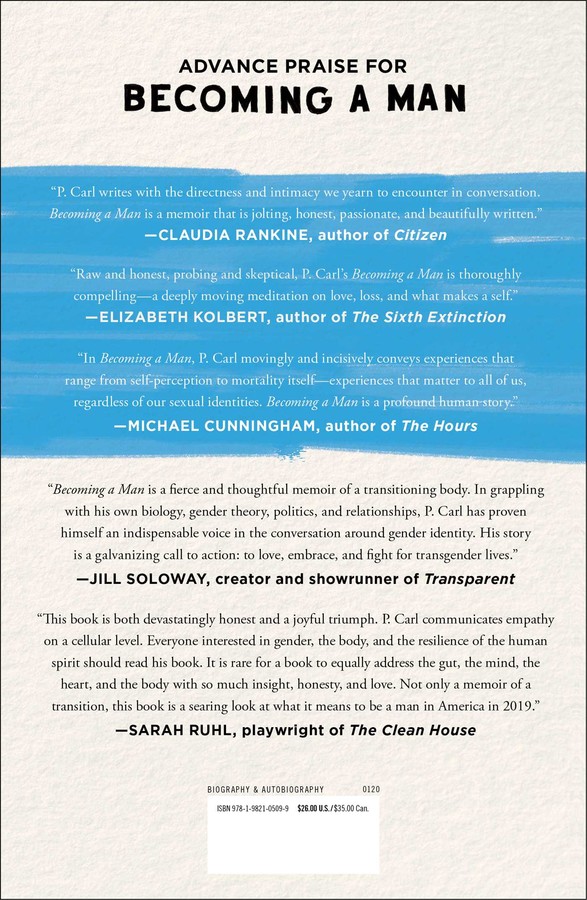 The Story of a Transition

“A memoir that is jolting, honest, passionate, and beautifully written” (Claudia Rankine), Becoming a Man explores one man’s gender transition amid a pivotal political moment in America.

Becoming a Man is the striking memoir of P. Carl’s journey to become the man he always knew himself to be. For fifty years, he lived as a girl and a queer woman, building a career, a life, and a loving marriage, yet still waiting to realize himself in full. As Carl embarks on his gender transition, he takes us inside the complex shifts and questions that arise throughout—the alternating moments of arrival and estrangement. He writes intimately about how transitioning reconfigures both his own inner experience and his closest bonds—his twenty-year relationship with his wife, Lynette; his already tumultuous relationships with his parents; and seemingly solid friendships that are subtly altered, often painfully and wordlessly.

Carl blends the remarkable story of his own personal journey with incisive cultural commentary, writing brilliantly about gender, power, and inequality in America. His transition occurs amid the rise of the Trump administration and the #MeToo movement—a transition point in America’s own story, when transphobia and toxic masculinity are under fire even as they thrive in the highest halls of power. Carl’s quest to become himself and to reckon with his masculinity mirrors, in many ways, the challenge before the country as a whole, to imagine a society where every member can have a vibrant, livable life. Here, through this brave and deeply personal work, Carl brings an unparalleled new voice to this conversation. 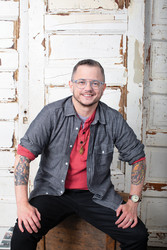 P. Carl is a Distinguished Artist-in-Residence at Emerson College in Boston and was awarded a 2017 Art of Change Fellowship from the Ford Foundation, the Berlin Prize fellowship from the American Academy for the Fall of 2018, the Andrew W. Mellon Creative Research Residency at the University of Washington, and the Anschutz Fellowship at Princeton for spring of 2020. He made theater for twenty years and now writes, teaches, travels, mountain climbs, and swims. He resides in Boston and lives with his wife of twenty-two years, the writer Lynette D’Amico and their dogs Lenny and Sonny. Becoming a Man is his first book.

“[Carl] writes with the directness and intimacy we yearn to encounter in conversation. Becoming A Man is a memoir that is jolting, honest, passionate and beautifully written.”
—Claudia Rankine

“Raw and honest, probing and skeptical, P. Carl’s Becoming a Man is thoroughly compelling—a deeply moving meditation on love, loss, and what makes a self.”
—Elizabeth Kolbert

"Becoming a Man is a fierce and thoughtful memoir of a transitioning body. In grappling with his own biology, gender theory, politics, and relationships, P. Carl has proven himself an indispensable voice in the conversation around gender identity. His story is a galvanizing call to action: to love, embrace, and fight for transgender lives."
—Jill Soloway, creator and showrunner of Transparent

"This moving narrative illuminates the joy, courage, necessity, and risk-taking of his gender transition and the ways his loved ones became affected and eventually enriched by it. A passionate, eloquent memoir about how "complex stories of humanity [and] our capacity for imagination are what give us hope."—Kirkus

“In this deeply personal and moving debut memoir, theater writer Carl shares the story of his difficult yet triumphant gender transition…. Carl’s honest, timely musings illustrate the deep ruminations that can arise about one’s assigned gender at birth and the gender one becomes. Carl’s thoughts about sexuality and his compassionate feelings for sexual assault survivors will captivate readers from the first page to the last.”—Publishers Weekly

In a scrupulously honest memoir, P. Carl examines how his transition upended both his marriage and his notions of white masculinity. Included within is a compassionate letter he composes to his lesbian-identifying wife: "I wonder as I write this what you miss most."—O, The Oprah Magazine

“Wondrous…. Carl has written a poignant and candid self-appraisal of life as a ‘work of progress.’”—Booklist

The Story of a Transition