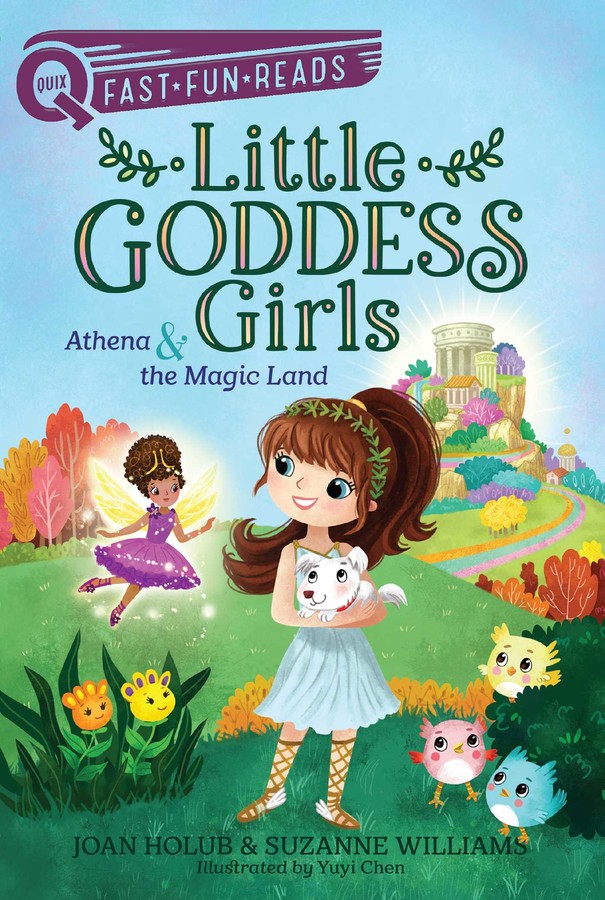 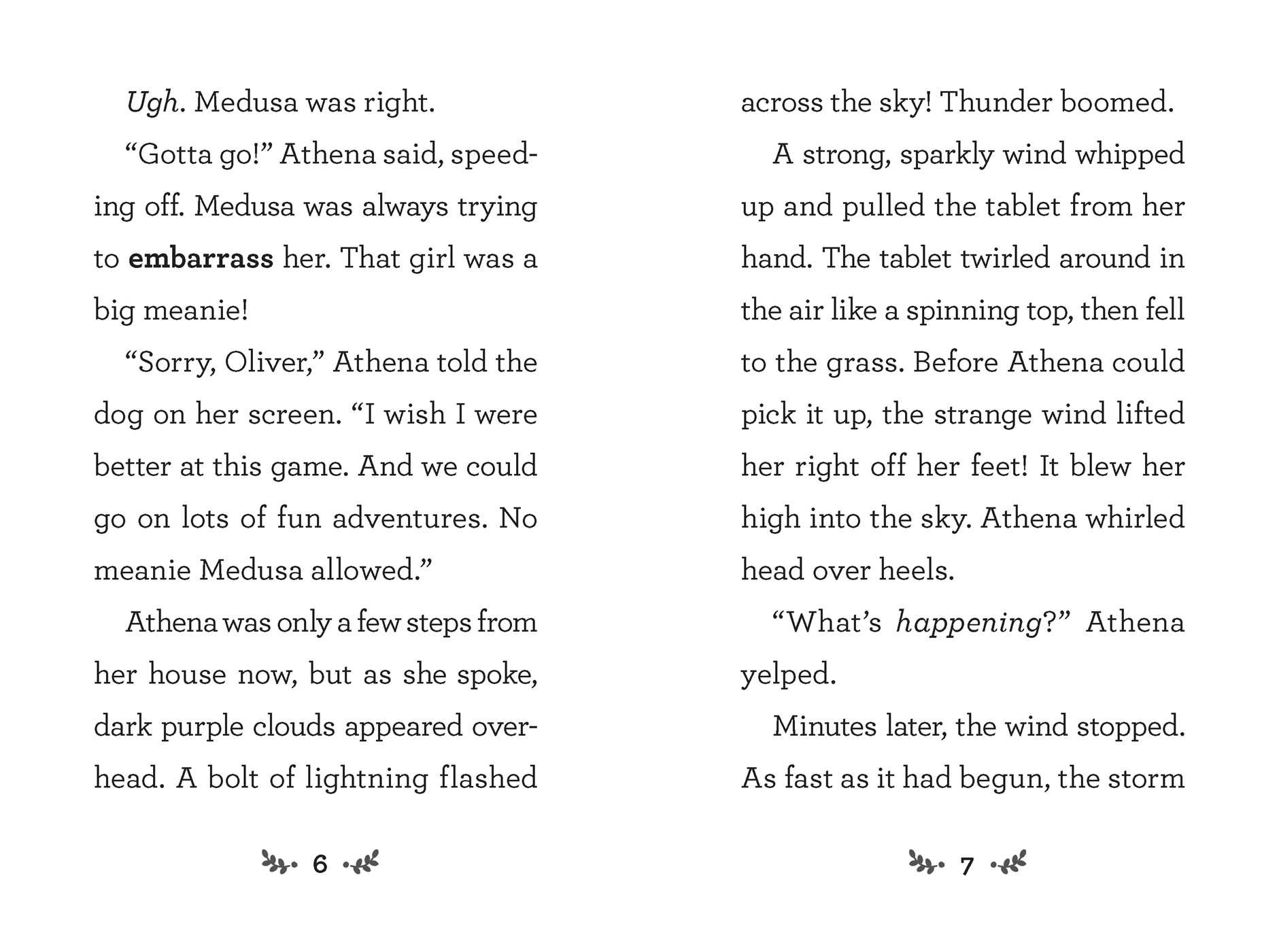 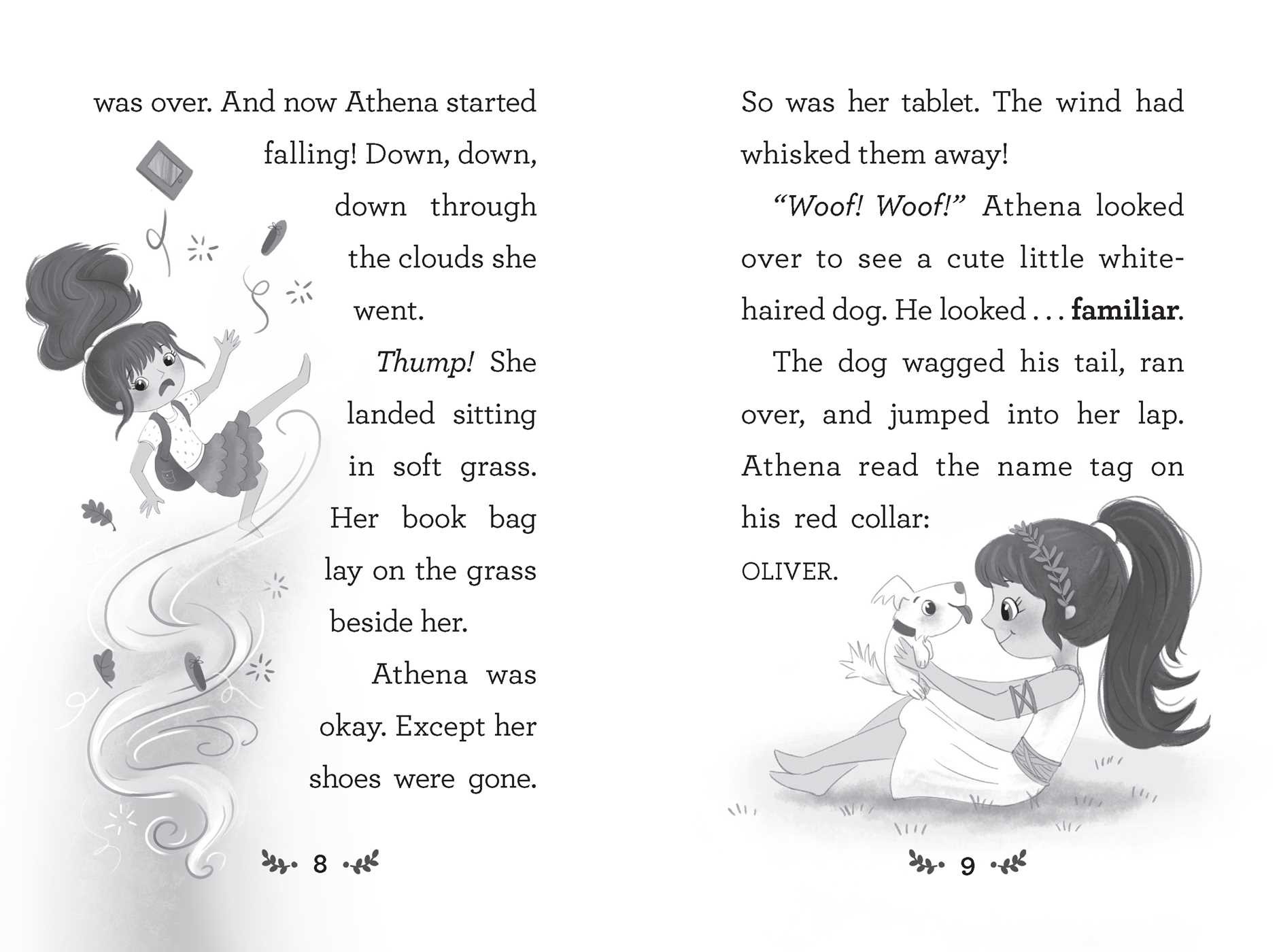 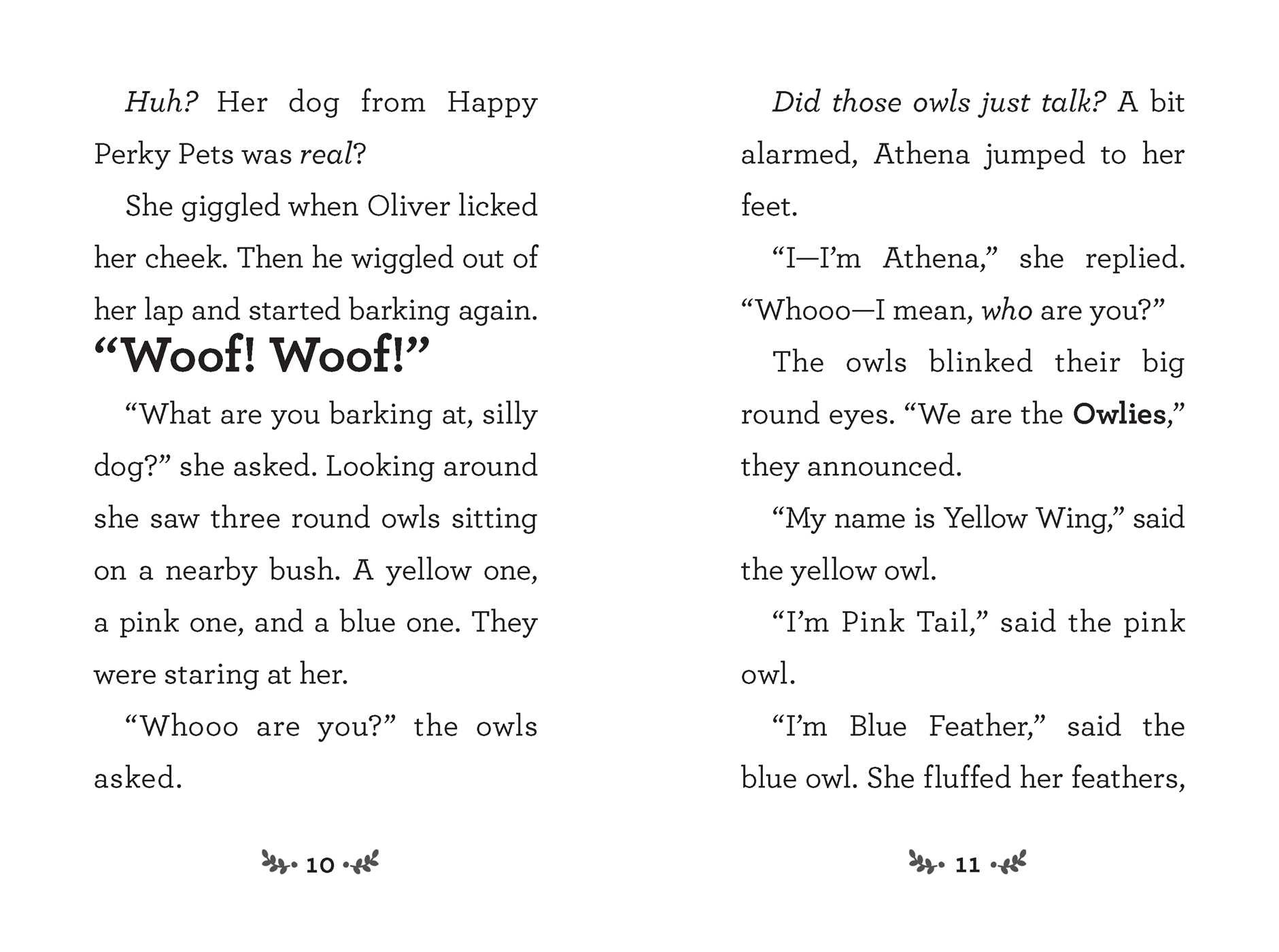 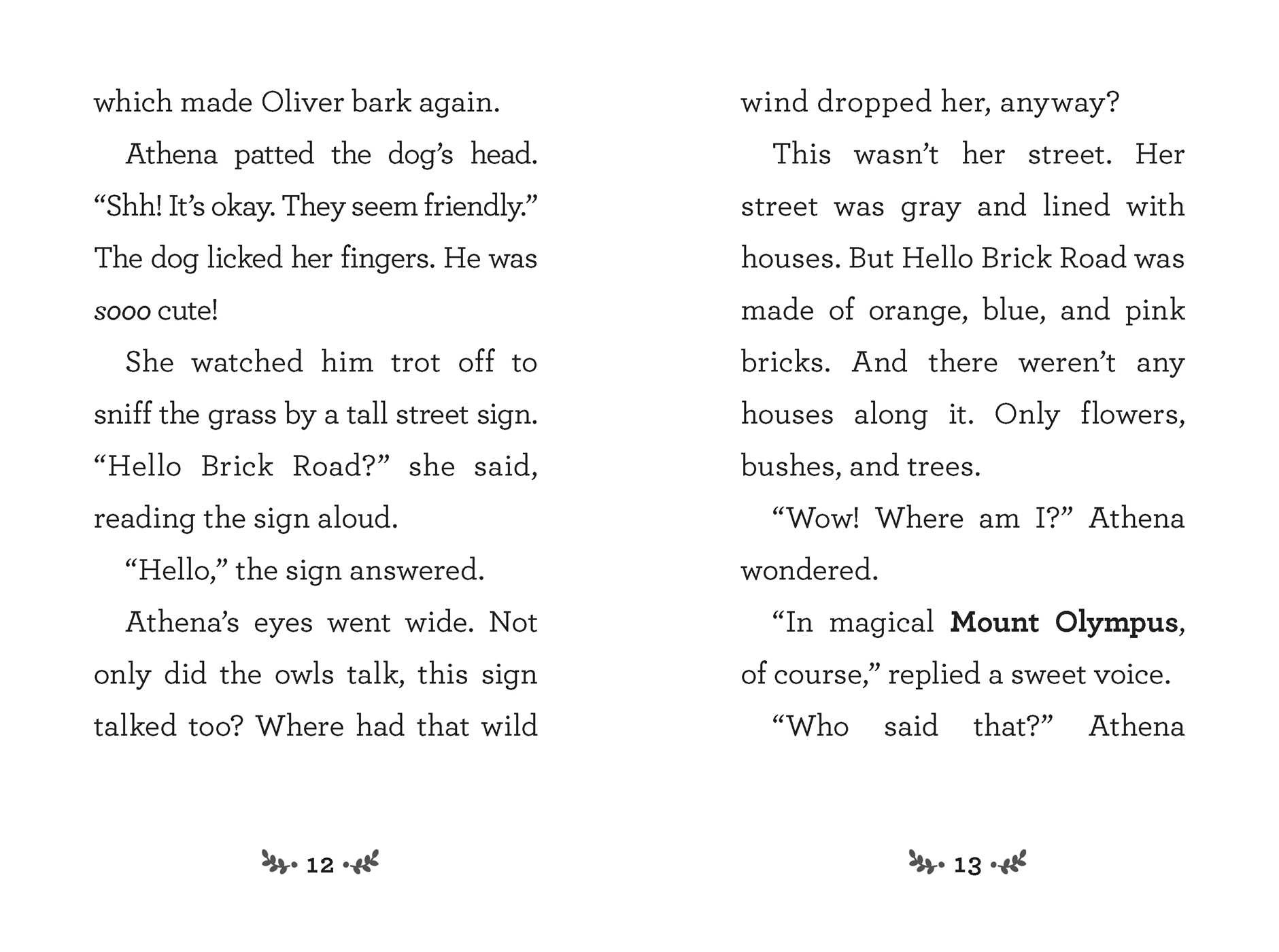 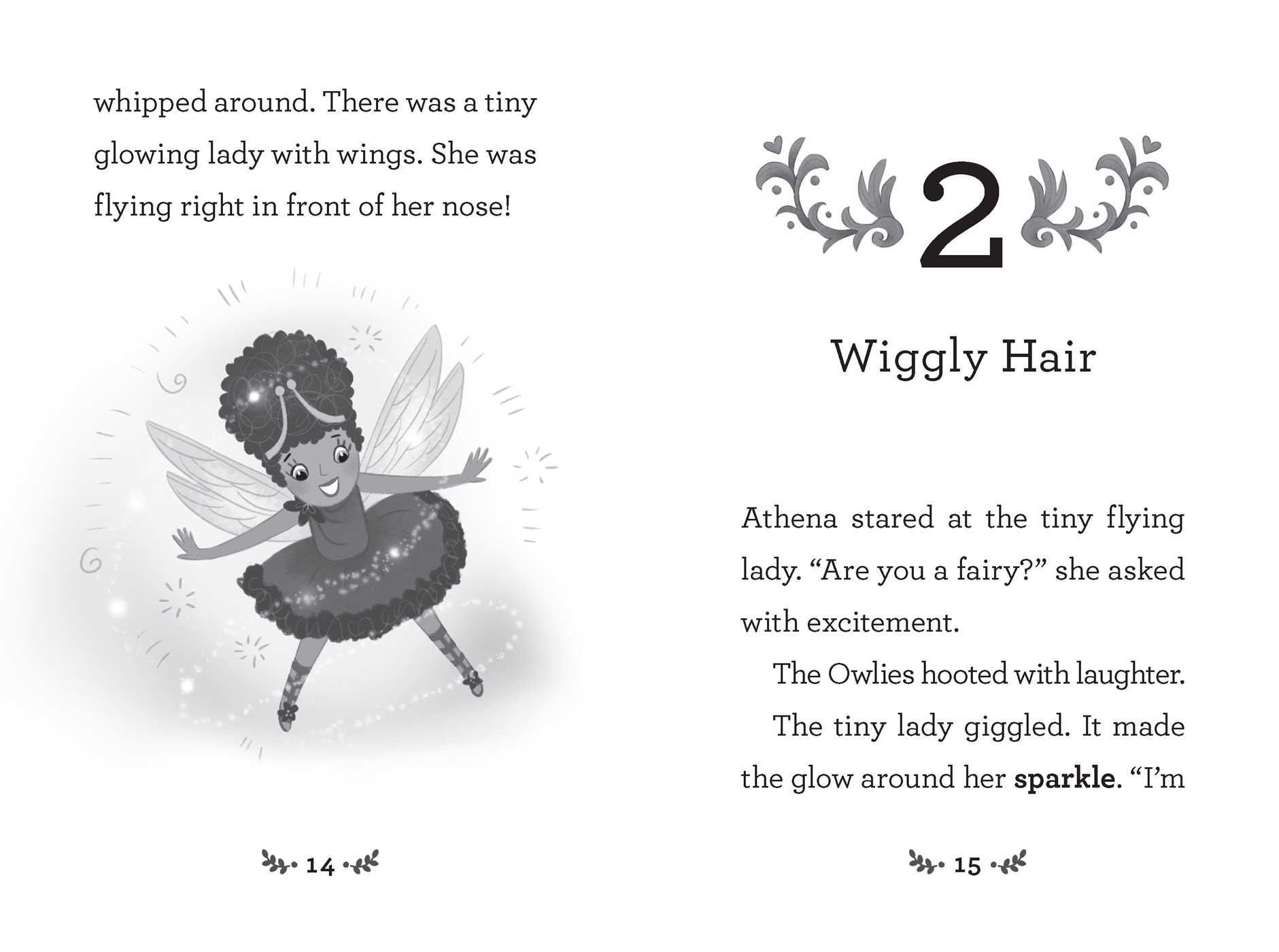 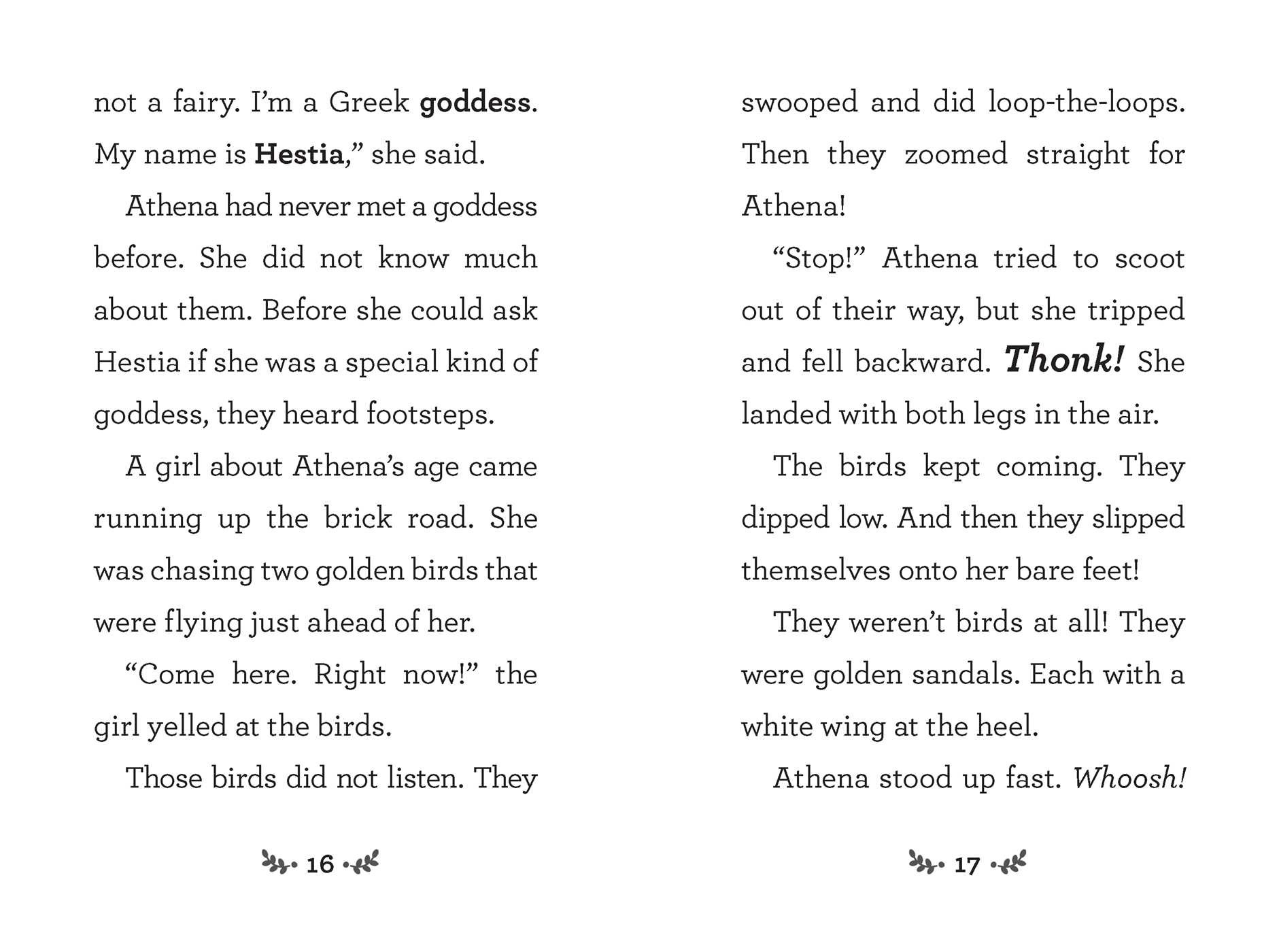 Little Athena finds herself on a Wizard of Oz inspired adventure in this first Little Goddess Girls story—part of the Aladdin QUIX line!

After a strange and sparkly storm carries her away from home, Athena finds herself in a land filled with magic, talking animals, and incredible objects with magical powers—the land of Mount Olympus! When Athena arrives, she’s greeted by the talking Owlies and is paired with very special magical sandals—sandals with powers that Medusa, a green, snake-haired girl, wants for herself!

A glowing goddess (of hearth and home) named Hestia appears and warns Athena that if Medusa gets her snakes on those sandals, she’ll surely use its powers to make trouble for Mount Olympus! But Athena has more important things on her mind—like going back home! Determined to find her way back, Athena heads off on an adventure through the magical landscape of Mount Olympus to try and elude Medusa—and find her way back to the mortal world once and for all with the help of the great and powerful Zeus!

Tap. Tap. Athena pushed the buttons on the tablet she held. The school bus came to a stop, and she hopped off. Without looking up from her tablet, she walked down the sidewalk. She lived in a white house on this block, with her mom, dad, and big sister.

Tap. Tap. Athena pushed more buttons. Happy Perky Pets was the best game ever! Even if she wasn’t very good at it, it was still fun.

The goal was to get your pet to a happily-ever-after home. The pet she had chosen in the game was a cute little dog. He had white fur and a red collar. She’d named him Oliver. If only he were real!

Dogs were her very favorite animal. In fact, she had decorated her book bag with shiny dog-shaped stickers. Too bad her mom had said they couldn’t get a real dog till she was older. Athena thought being eight was old enough!

“Oh no!” A boink sound meant: Oops! Start the game over and try again.

“Ha! You lose.” Athena looked behind her. It was Medusa. She went to Athena’s school and was never very nice to her. Or to anyone.

“So?” huffed Athena. She started walking faster. Medusa did too. Their houses were on this same street.

“You picked a dog for your pet?” Medusa teased. “BOR-ing! I picked a green snake. I named her Wiggle Warts.”

Athena stared at her in surprise. Eww! She did not like snakes.

She looked down at her game again. Tap. Tap. Boink! “Uh-oh, not again!” This time, lumpy brown emojis began appearing on the screen.

Medusa laughed. “Ha! Ha! You made doggie poo!” she said, pointing at the tablet.

“Gotta go!” Athena said, speeding off. Medusa was always trying to embarrass her. That girl was a big meanie!

“Sorry, Oliver,” Athena told the dog on her screen. “I wish I were better at this game. And we could go on lots of fun adventures. No meanie Medusa allowed.”

Athena was only a few steps from her house now, but as she spoke, dark purple clouds appeared overhead. A bolt of lightning flashed across the sky! Thunder boomed.

A strong, sparkly wind whipped up and pulled the tablet from her hand. The tablet twirled around in the air like a spinning top, then fell to the grass. Before Athena could pick it up, the strange wind lifted her right off her feet! It blew her high into the sky. Athena whirled head over heels.

Minutes later, the wind stopped. As fast as it had begun, the storm was over. And now Athena started falling! Down, down, down through the clouds she went.

Thump! She landed sitting in soft grass. Her book bag lay on the grass beside her.

Athena was okay. Except her shoes were gone. So was her tablet. The wind had whisked them away!

The dog wagged his tail, ran over, and jumped into her lap. Athena read the name tag on his red collar: OLIVER.

Huh? Her dog from Happy Perky Pets was real?

She giggled when Oliver licked her cheek. Then he wiggled out of her lap and started barking again. “Woof! Woof!”

“What are you barking at, silly dog?” she asked. Looking around she saw three round owls sitting on a nearby bush. A yellow one, a pink one, and a blue one. They were staring at her.

“Whooo are you?” the owls asked.

Did those owls just talk? A bit alarmed, Athena jumped to her feet.

The owls blinked their big round eyes. “We are the Owlies,” they announced.

“My name is Yellow Wing,” said the yellow owl.

“I’m Blue Feather,” said the blue owl. She fluffed her feathers, which made Oliver bark again.

Athena patted the dog’s head. “Shh! It’s okay. They seem friendly.” The dog licked her fingers. He was sooo cute!

She watched him trot off to sniff the grass by a tall street sign. “Hello Brick Road?” she said, reading the sign aloud.

Athena’s eyes went wide. Not only did the owls talk, this sign talked too? Where had that wild wind dropped her, anyway?

This wasn’t her street. Her street was gray and lined with houses. But Hello Brick Road was made of orange, blue, and pink bricks. And there weren’t any houses along it. Only flowers, bushes, and trees.

“Wow! Where am I?” Athena wondered.

“In magical Mount Olympus, of course,” replied a sweet voice.

“Who said that?” Athena whipped around. There was a tiny glowing lady with wings. She was flying right in front of her nose!

Yuyi Chen began her career as a 3-D artist making video games, then realized her true passion is illustrating for children. She also likes to spend her time reading, listening to her children laugh, and pretending she’s a competitive cake decorator. She lives in Washington with her two sons.