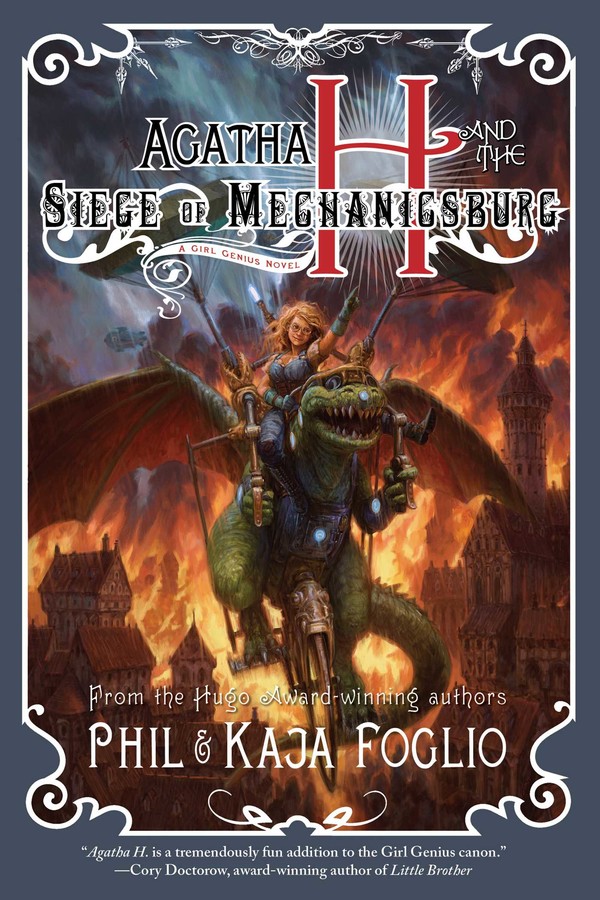 Agatha H and the Siege of Mechanicsburg

In a time when the Industrial Revolution has become an all-out war, mad science rules the world—with mixed success.

In Agatha H and the Siege of Mechanicsburg, Agatha Heterodyne, the last of the Heterodyne family, has returned to her family’s hereditary town with the might of the Wulfenbach Empire hot on her heels. The only thing holding off an outright attack is Gilgamesh Wulfenbach, the heir to the Empire, who has joined Agatha and her friends inside the great artificially intelligent fortress of Castle Heterodyne. Now they must race to repair the mechanisms that once allowed the Castle to defend Mechanicsburg, before the rest of Europa shows up to take all the revenge the mad Heterodynes of the past so richly earned.

From the Hugo Award–winning Girl Genius online comics comes this fourth book in the Agatha H. series, and like the previous three books, it will engage you in a unique world of adventure, romance, and mad science!

“Filled with folgian touches—Borscht-belt comedy accents, things that go sproing, adorkable sentient machines, and laugh-a-minute slapstick— Agatha H. is a tremendously fun addition to the Girl Genius canon.”—Cory Doctorow, award-winning author of Little Brother and Down and
Out in the Magic Kingdom

“This volume by the creators of the Eisner Award–nominated webcomic Girl Genius (Volumes 1–9) is a fantastic reintroduction to the Girl Genius world and will definitely capture new fans. It will appeal to fans of the steampunk genre who like their books riddled with mad science and
adventure, along with a liberal dash of humor.”—Library Journal

“Simply said, Girl Genius has everything I look for in a story.”—Patrick Rothfuss, bestselling author of The Name of the Wind

“. . . the Foglios appear to have been liberated by the [webcomics] format—and that sense of buoyant imagination and unbridled fun runs through every page.”—The Onion A.V. Club

“…ridiculous, and funny, and a little bit sexy.”—Portland Book Review

“Phil and Kaja Foglio’s awesome new fantasy . . . pushes the boundaries of steampunk past the polite boundaries of pseudo-Victorian and into full-on techo-madness!”—Matt Staggs, Suvudu.com

“Fans of the series will enjoy another trip into Agatha’s world, and it is not too late for new readers to jump aboard.”—City Book Reviews

“I will confess to being a big fan of Phil and Kaja Foglio’s Girl Genius”—Charles Stross, author of Halting State and Rule 34

“…a madcap comic adventure combined with steampunk and some well-usedfantasy tropes.”—EscapePod

“. . . bursting at the seams with creativity, humor, and outright weirdness . . . an infectious and incredibly fun read.”—Sarah Kuhn, ign.com

“If Jules Verne had written comics, he wouldn’t have written Girl Genius. He would have been jealous of it, though.”—Comics Buyer’s Guide

“Girl Genius is brilliant. It really is. It’s fun and funky and unlike almost anything else, and it’s Phil and Kaja Foglio doing what they do best.”—Eric Burns, Websnark.com

Agatha H and the Siege of Mechanicsburg