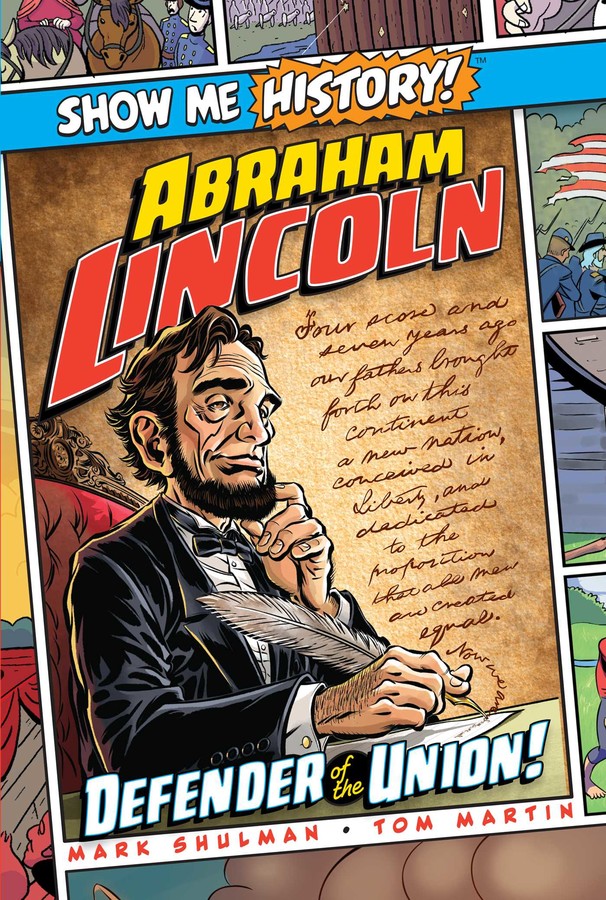 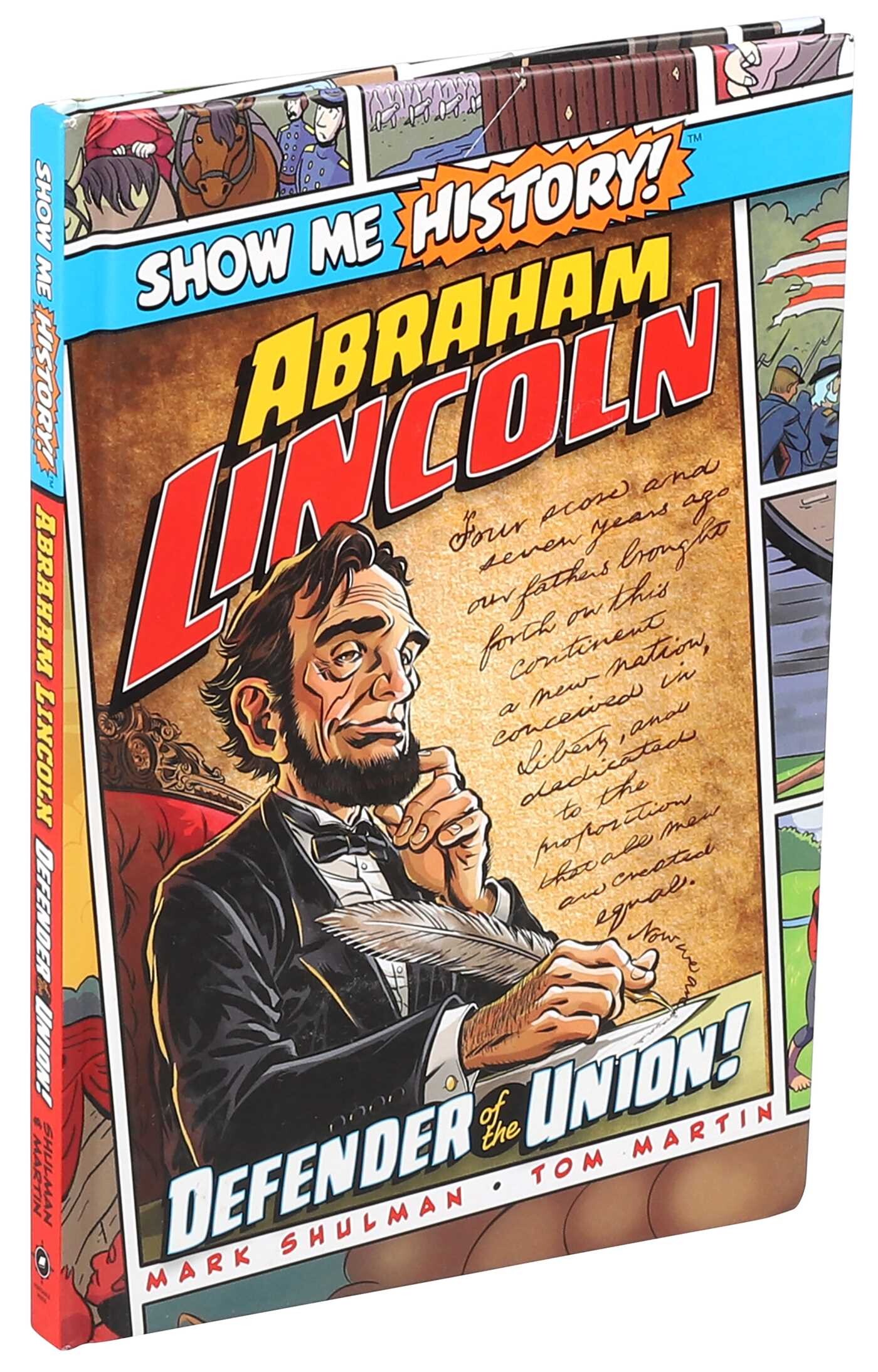 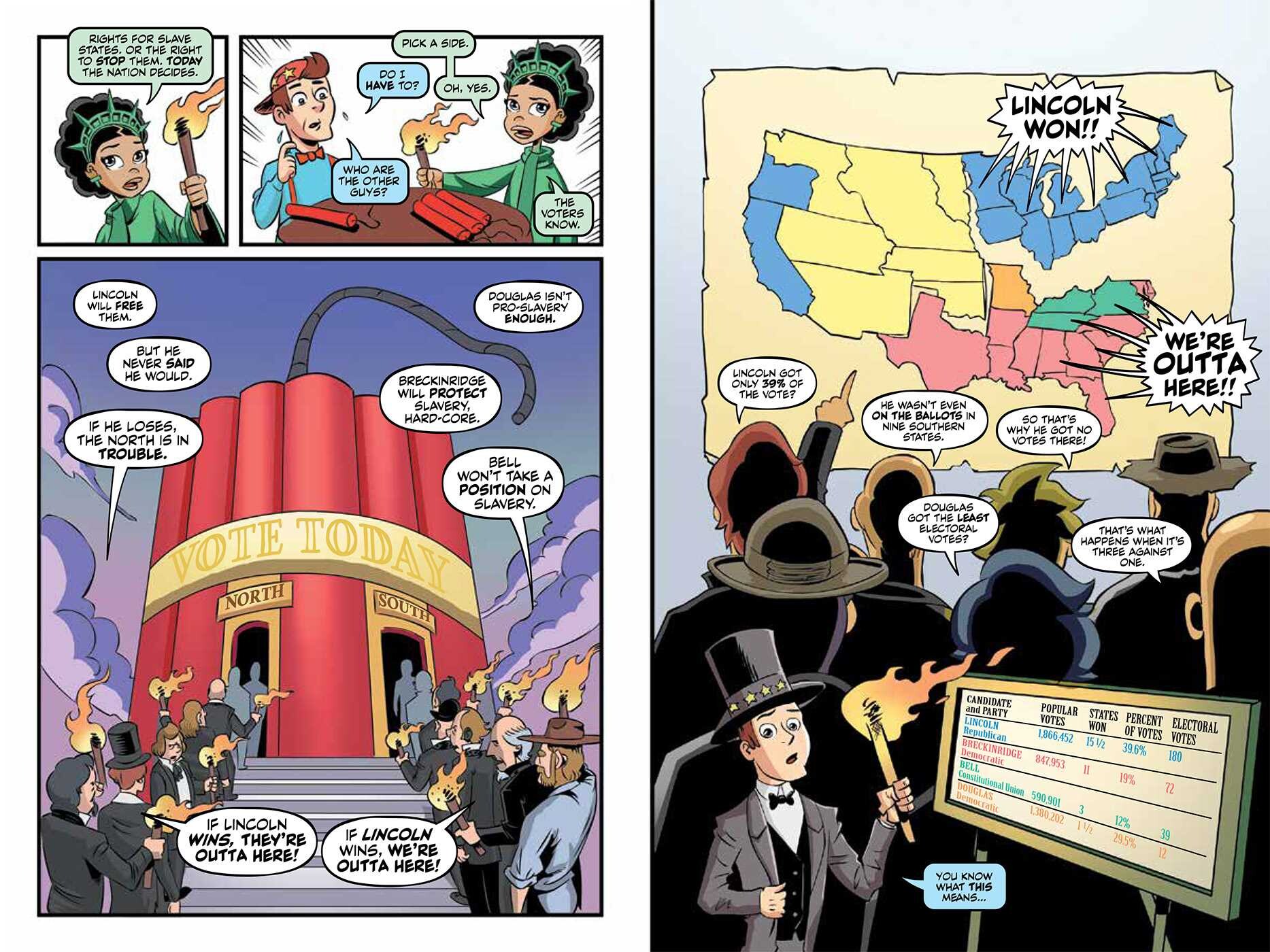 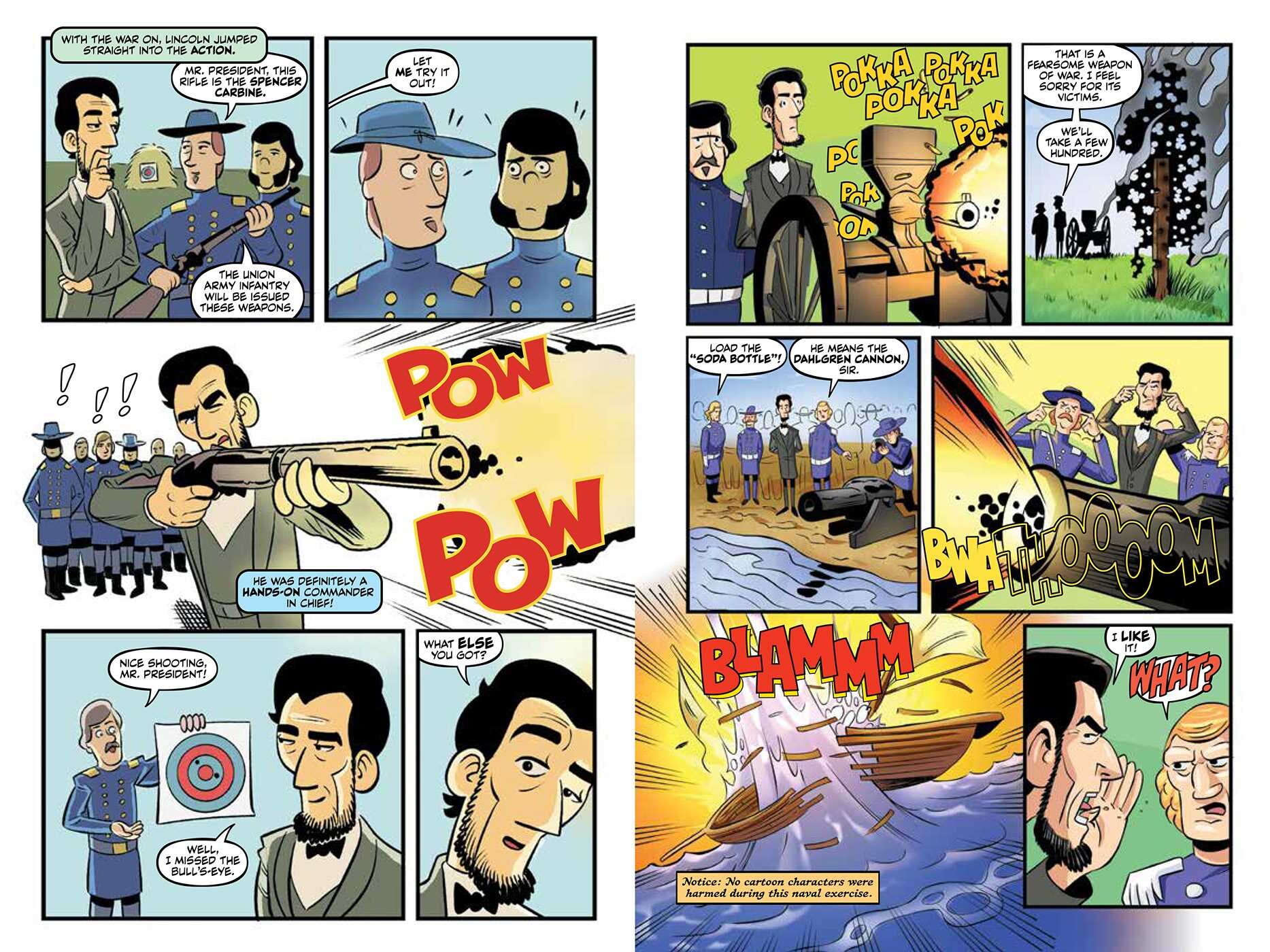 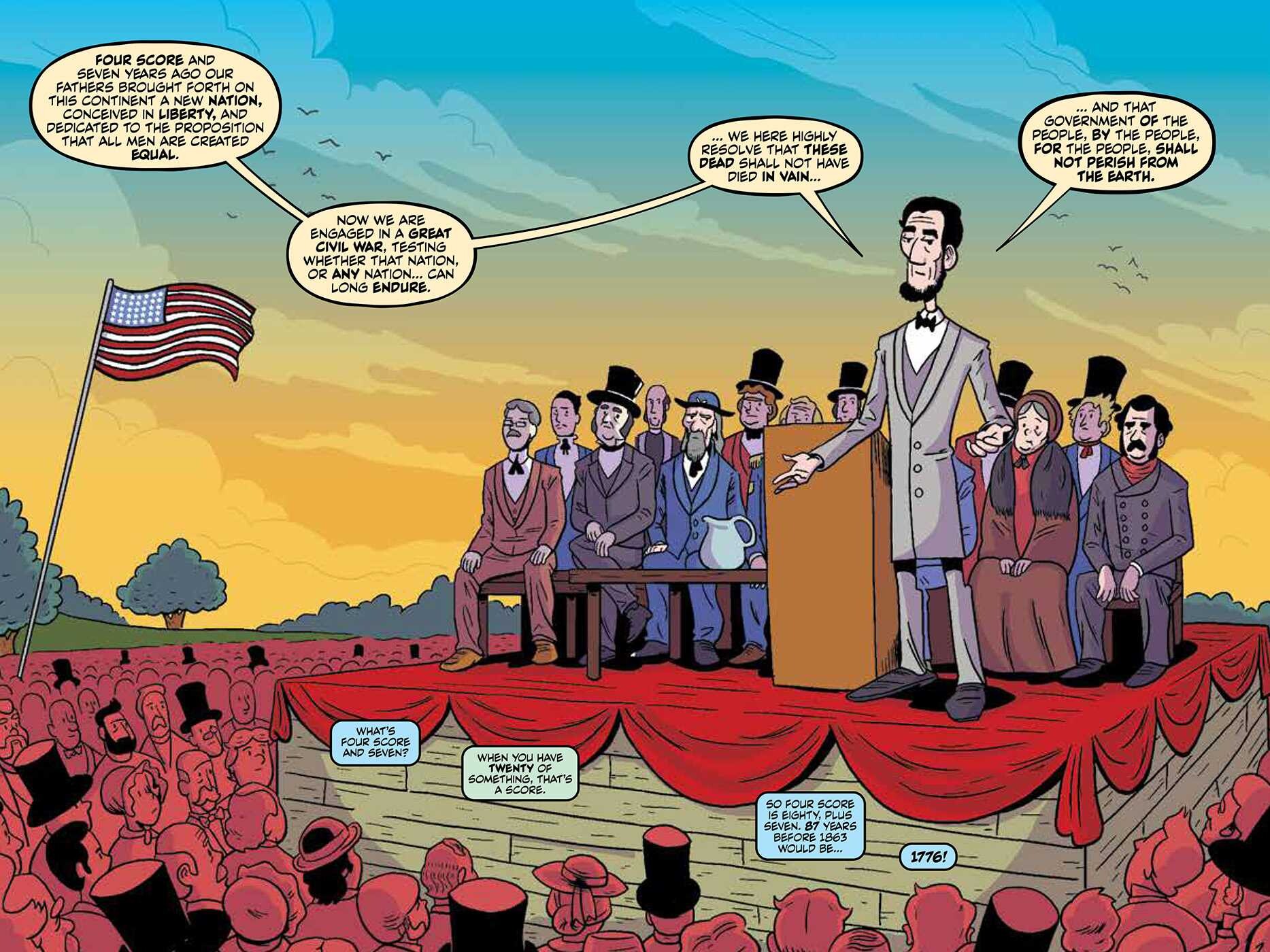 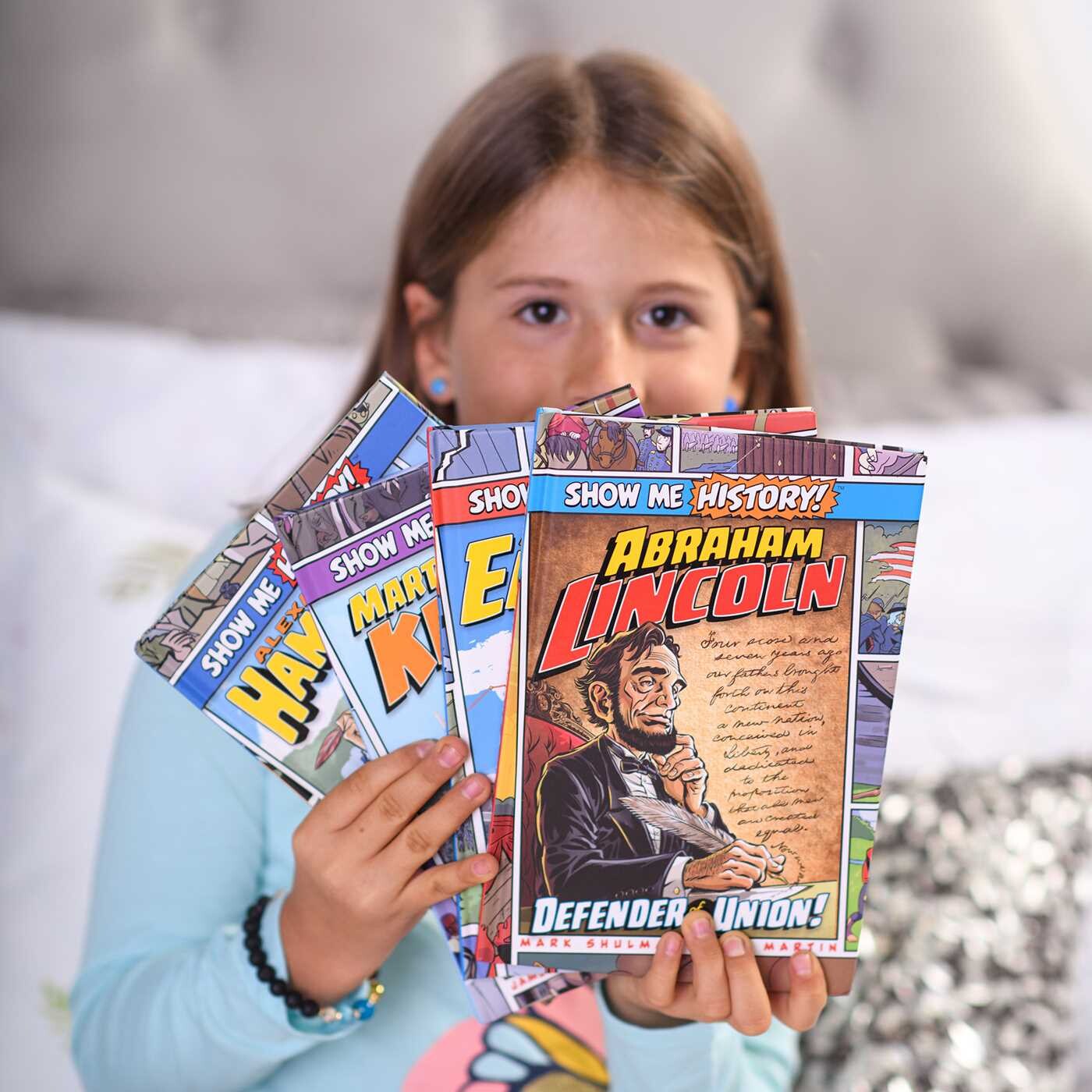 Abraham Lincoln: Defender of the Union!


Considered by many historians to be the greatest American president, Abraham Lincoln led the Union at the greatest turning point in the nation’s history. Abraham Lincoln: Defender of the Union! tells the story of one of America’s most admired figures in graphic novel format. From his childhood on a farm in Kentucky to the battlefields of the Civil War, Abraham Lincoln served the United States with resolve, intelligence, and courage unlike that of any other president. Readers of all ages will be entertained and educated by the full-color illustrations and historically accurate narrative of this graphical biography.

Mark Shulman has written more than 150 books for kids of all ages, including illustrated stories for Marvel Comics, Scholastic, Chronicle Books, Simon & Schuster, and more. Their subjects include The Incredible Hulk, Madagascar, Shamu the orca, The Amazing World of Gumball, and others. Mark started reading comics when they cost just 15 cents and hasn't stopped. He's still got Silver Surfer #1 in very fine condition, and he's not letting it go.

Tom Martin graduated from the Joe Kubert School of Cartoon and Graphic Art, where he studied cartooning and sequential storytelling. When not doing graphic design and private commissions, he worked for Dark Horse, Busstrykk, Hasbro, AT&T, and others. For more of his work, follow him on Instagram (@undeadwizardart) and Twitter (@Tom_Martin_Art).

SHOW ME HISTORY SERIES. PORTABLE. GR. 3–7. (4 TITLES)
Abraham Lincoln: Defender of the Union! By Mark Shulman. Illus. by Tom Martin. 2019. 96p. $12.99 (9781684125449). 973.7092.
Alexander Hamilton: The Fighting Founding Father! By Mark Shulman. Illus. by Kelly Tindall and John Roshell. 2019. 96p. $12.99 (9781684125432). 973.4092.
Amelia Earhart: Pioneer of the Sky! By James Buckley Jr. Illus. by Kelly Tindall and John Roshell. 2019. 96p. $12.99 (9781684125456). 629.13092.
Martin Luther King Jr: Voice for Equality! By James Buckley Jr. Illus. by YouNeek Studios and John Roshell. 2019. 96p. $12.99 (9781684125463). 323.092.
Bunking the notion that history is dull, these titles in the Show Me History! series convey the lives of notable historical figures through colorful and spirited cartoons. The young narrators are Libby, an African American “Lady Liberty,” and Sam, a white, patriotically attired teen who will one day be known as “Uncle Sam.” The books’ conversational tone, with occasional surprises and humorous exchanges, describe the high and low points of each figure and his or her impact on American history. In addition, color-coded speech balloons and stylized fonts reflect actual quotes and writings. Abraham Lincoln recounts the numerous setbacks and rivalries Lincoln experienced on the road to the presidency and during the Civil War. Alexander Hamilton relates how Hamilton’s childhood experiences influenced his service under General George Washington during the American Revolution and how he helped found a new nation, creating a national bank, for example. Amelia Earhart documents the aviator’s record-setting firsts, her role as a feminist, and how her disappearance continues to turn out new facts and conspiracy theories. Martin Luther King Jr. traces how this civil rights activist fought for racial equality through nonviolent messages and protests. Each biography concludes with a round-up of related individuals, a time line, a glossary, and a list of resources. This series makes history approachable and engaging, especially for reluctant readers.

Abraham Lincoln: Defender of the Union!

More books in this series: Show Me History!