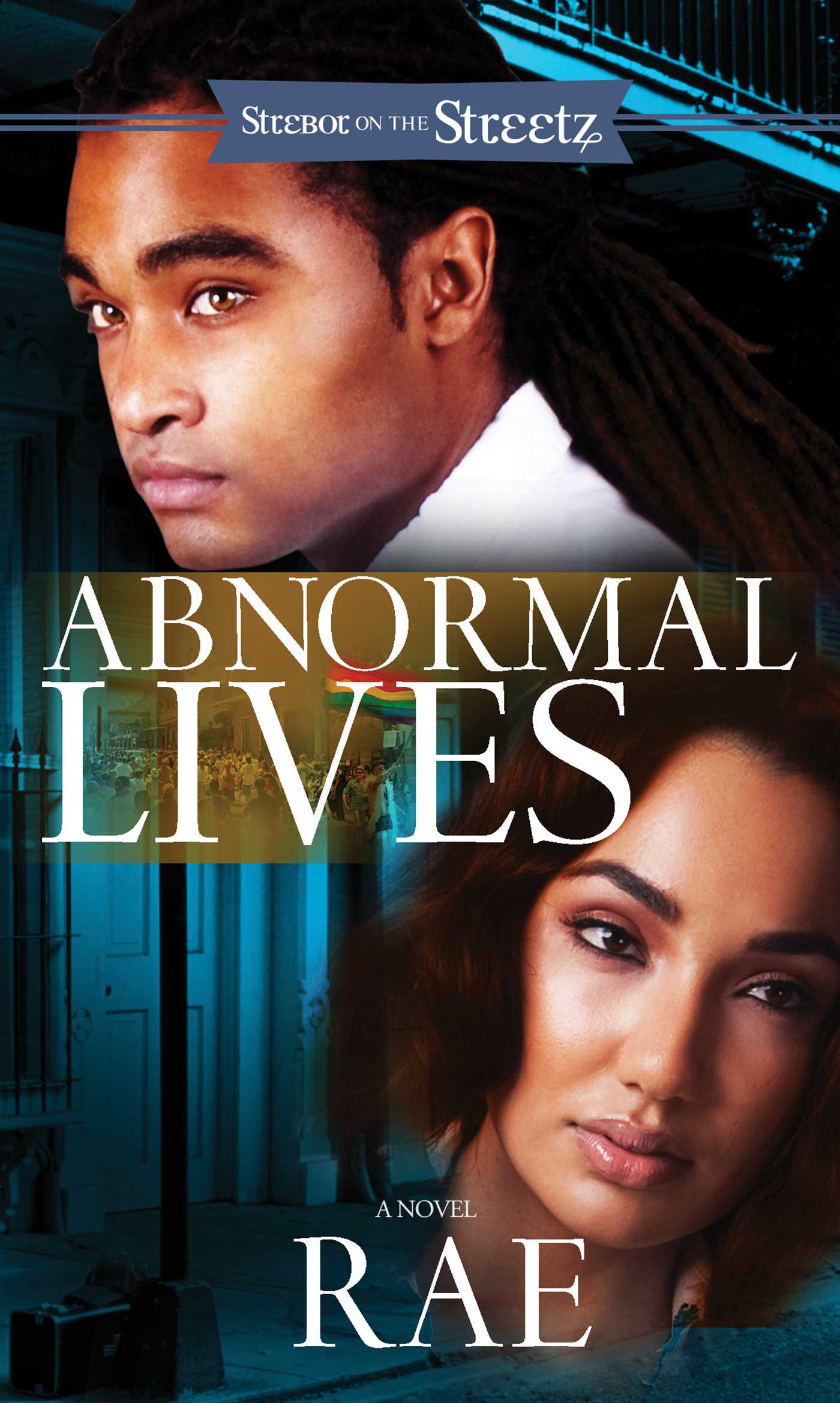 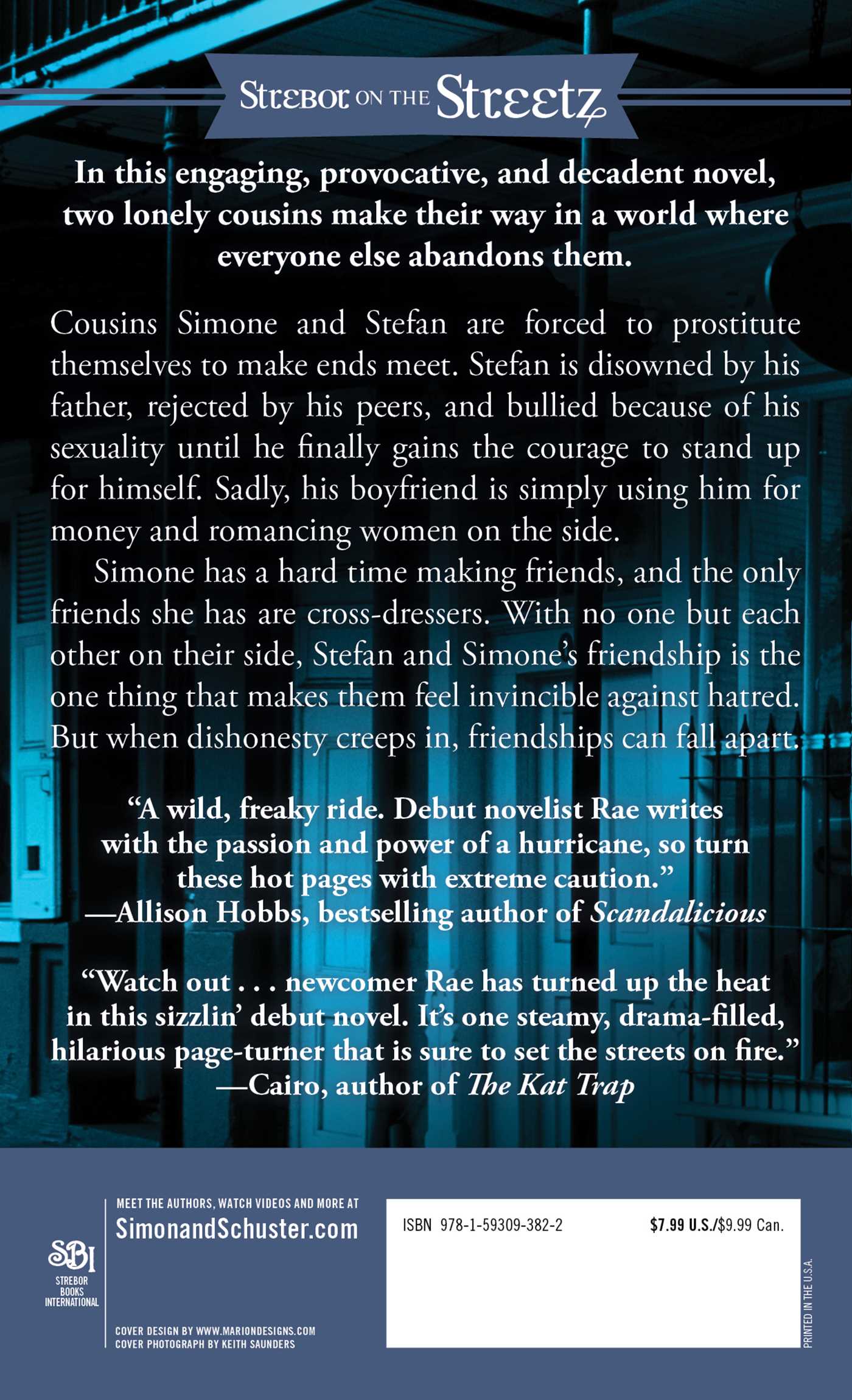 In this engaging, provocative, and decadent novel, two lonely cousins make their own way in the world when everyone else abandons them.

Cousins Simone and Stefan are forced to prostitute themselves to make ends meet. Stefan is disowned by his father, rejected by his peers and family, and bullied because of his sexuality until he finally gains the courage to stand up for himself. Sadly, his boyfriend is simply using him for money and romancing women on the side. Simone has a hard time making friends, and the only friends she has are cross-dressers. All they have is each other. Their friendship is the one thing that makes them feel invincible against the hatred toward them. But when everyone is dishonest about their indiscretions, friendships fall apart. Abnormal Lives takes readers from the despair of a life of crime to the hope and redemption of spirituality and love.

Abnormal Lives 1
It was ten o’clock on a Friday night. Simone sat inside of the fitness center, entertaining her client, Mason. Mason was the director of the center and usually planned their meetings there after-hours. Simone sat on the edge of the hot tub wearing a pink G-string and Mason stood inside the encircling pool with Simone’s thighs resting on his shoulders.

“My wife saw the present you gave me a few weeks back,” Mason announced proudly, as he walked his fingers up Simone’s thighs.

Simone sighed. It’s not like it’s the first time and it won’t be the last, she thought. “Well, what did she think of it?” Simone tried not to disclose how humored she was by her remark.

The present Mason referred to was the hickey Simone had placed on the shaft of his penis. That was her trademark. Men from all over the Tri-City area contacted her to see could and would the pretty, petite, wavy-haired, fair-skinned doll baby pucker up her plump pink lips to perform the act that all of their friends and colleagues bragged about.

Once she proved that she could and would, if they were willing to pay her fee for the priceless experience, they became loyal customers that contacted her on a regular basis to have the “O”-shaped bruise on their genitals that they held with the same regards that bikers and gangsters held their tattoos, retouched before it faded away. It had only been three weeks since she had last provided Mason with her services and there he was, standing in front of her waiting to be retouched, among other things.

Simone liked dealing with Mason. She understood what to expect from him. He never showed up drunk or flying off of the handle as a result of hallucinogens. That was behavior she’d tolerated from the petty, low-class criminals she’d started out servicing. They would beat, belittle, and refuse to pay women in her profession after they’d romped around with them on old, pissy mattresses. Simone had paid her dues to earn the status she now held in her profession and refused to deal with that nonsense. That was one of the reasons why most of her clients were upper middle-class whites; the few that were black held the same social status. The other reason for that was they were willing to pay more money. Money that the lower-class troublemakers couldn’t afford to let leave their pockets.

Mason also referred a lot of his friends to Simone, which was good for business. Simone also liked the fact that Mason wasn’t long-winded. She could get it down as fast as she could get it up and when it was over, it was over. Mason didn’t try to stall to keep her around while he tried to have another erection. Her terms of service were, once her client ejaculated while she performed the service he’d requested, her job was done. Some of her clients had her perform one act, some paid for two or three, but after they ejaculated as the result of each service, or lost their erection, whichever came first, she was off the clock. Mason stuck to those terms. Being that Mason wasn’t what she considered to be endowed, after she finished with him, she would still be in adequate condition to service another client before calling it a night.

What Simone didn’t like about Mason was how he never seemed to be able to put an end to his idle chitchat. Her time was more valuable to her than her services were to him. The more time she had, the more money she had the opportunity to make. She didn’t want to be rude. After all, he was a longtime customer. So she sat there in a rut while he rambled on about the weather.

Simone thought Mason might have been nervous. They had been together numerous times but, for some reason, he always seemed scared to touch her.

Simone’s legs shivered as a result of Mason’s jitteriness. She looked down at him and sighed.

“Nothing.” Simone removed her legs from Mason’s shoulders. “Come up here with me.”

Mason lifted himself up on the wall of the hot tub and sat beside Simone. Simone stood up, grabbed Mason’s hands, and pulled him closer to her. She knelt down in front of him and blushed at the sight of semen seeping from his partially erect organ. “You mean to tell me you’ve been in the pool hiding this from me all this time.”

“I wasn’t sure if you were ready for it.”

“Oh, is that right?” Simone drooled on his shaft and gently stroked it with her hand.

Mason stood up and began to slide his dick back and forth in her mouth. “That’s right; get it nice and wet.”

That’s a first, Simone thought. Usually, Mason would lay there lifeless, not uttering a single word while she did all of the work.

Simone slid her hands up Mason’s thighs and onto his hips. She thrust him forward, taking him entirely in her mouth. She could feel Mason’s dick pulsate as she secured it in her mouth and gathered saliva to create a massaging motion.

Mason pressed his lips together and looked up at the ceiling. He hoped Simone wouldn’t notice the ugly faces he was making while she pleased him.

Simone slid her index finger inside Mason’s rectum. His knees became weak and he plopped down on the wall of the hot tub. Simone followed his motion, never releasing her grip. Mason tugged on Simone’s weave and moaned at the top of his lungs as he reached his climax. He squirmed, unable to tolerate the overwhelming sensation he was being subjected to.

Simone stroked his organ with her hand to quicken his release. She almost laughed when Mason stood on the tip of his toes like a ballerina and cried out with pleasure.

“Whoo,” Mason cried out in between a series of pants. He looked back up at the ceiling and ran his fingers through Simone’s hair. “You’ve got my head spinning. If you can do all that with your mouth, I can’t wait to see what the pussy is like.”

Simone was puzzled. For as long as she had serviced Mason, he had never asked for pussy. Ass was his thing. Mason loved the way she slid her hips down on his dick until he fully occupied her anus and rode him like a jockey. He would want it tonight when I’m on my period; just my luck, Simone thought.

She sucked on Mason’s lip as she reached between her legs and freed her tampon into the hot tub. She straddled Mason and pushed herself down on his tool. It wouldn’t be long before he reached his climax. Simone could hear Mason’s breaths quicken as she pressed herself down on his dick harder and harder, lingering for a few seconds so he could feel the softness of her walls. In less than two minutes, Mason clutched Simone in his arms and called on the Lord.

Stefan lay in the bed with his man, Eugene. He threw his arm over Eugene’s chest and kissed him.

“Could you move over?” Eugene asked.

Stefan was fed up with Eugene’s attitude. Eugene had changed since he’d landed a job. When Eugene first came home from prison, things were wonderful. They would make love all night and sleep late into the day. Eugene would beg Stefan to let him take the condom off so he could feel his flesh. But now he didn’t even want Stefan to hold him. It was blatantly apparent that their relationship was only a ploy to help Eugene get on his feet. Now that Eugene had found a job and saved some money, he didn’t need Stefan anymore and he was ready to free himself from their relationship.

Stefan wondered if Eugene modeled the clothes he bought for him for some female when he wasn’t around. Stefan was sure Eugene was having sex with a woman in the apartment he paid the rent for. The thought of Eugene trying to impress some random chick with the things he had purchased for him made Stefan sick to his stomach.

Eugene liked females. Stefan saw the way he looked at them. Not only did he admire their beauty, he wanted to be entangled in it, he wanted a piece for himself. He’d noticed Eugene checking out the curves on his cousin, Simone, when he’d introduced them. He never brought them around one another again. He could not trust Eugene and he realized that Simone was weak.

Eugene pulled the covers over his head. “Come on with that. I’m tired,” he grumbled.

Life is too short for shit like this, Stefan thought. If Eugene was willing to throw away the security that Stefan provided him with over a female, then he could go right ahead. He was sure Eugene would run into some shabby whore that would fool him into believing that she was a lady. She’d be a little girl who had no clue where she was going; only what she wanted from him. She’d convince him that she was high-class when she was extremely high-maintenance. Eugene would exhaust his little savings trying to keep up with her and, when his money was gone, she would be also.

Stefan got out of bed and put on his clothes.

“Where you going?” Eugene asked.

“You’re not gonna fix me nothing to eat before you leave?”

“Come on with that; a nigga’s hungry.”

“You’ve got two hands; fix it yourself,” Stefan said as he opened the bedroom door and made his way down the stairs.

“Don’t forget the rent is due next week!” Eugene yelled.

“And don’t forget you’ve got a job now and you can pay it,” Stefan said as he slammed the front door.

Rae is a freelance writer living in Richmond, Virginia, with her son.