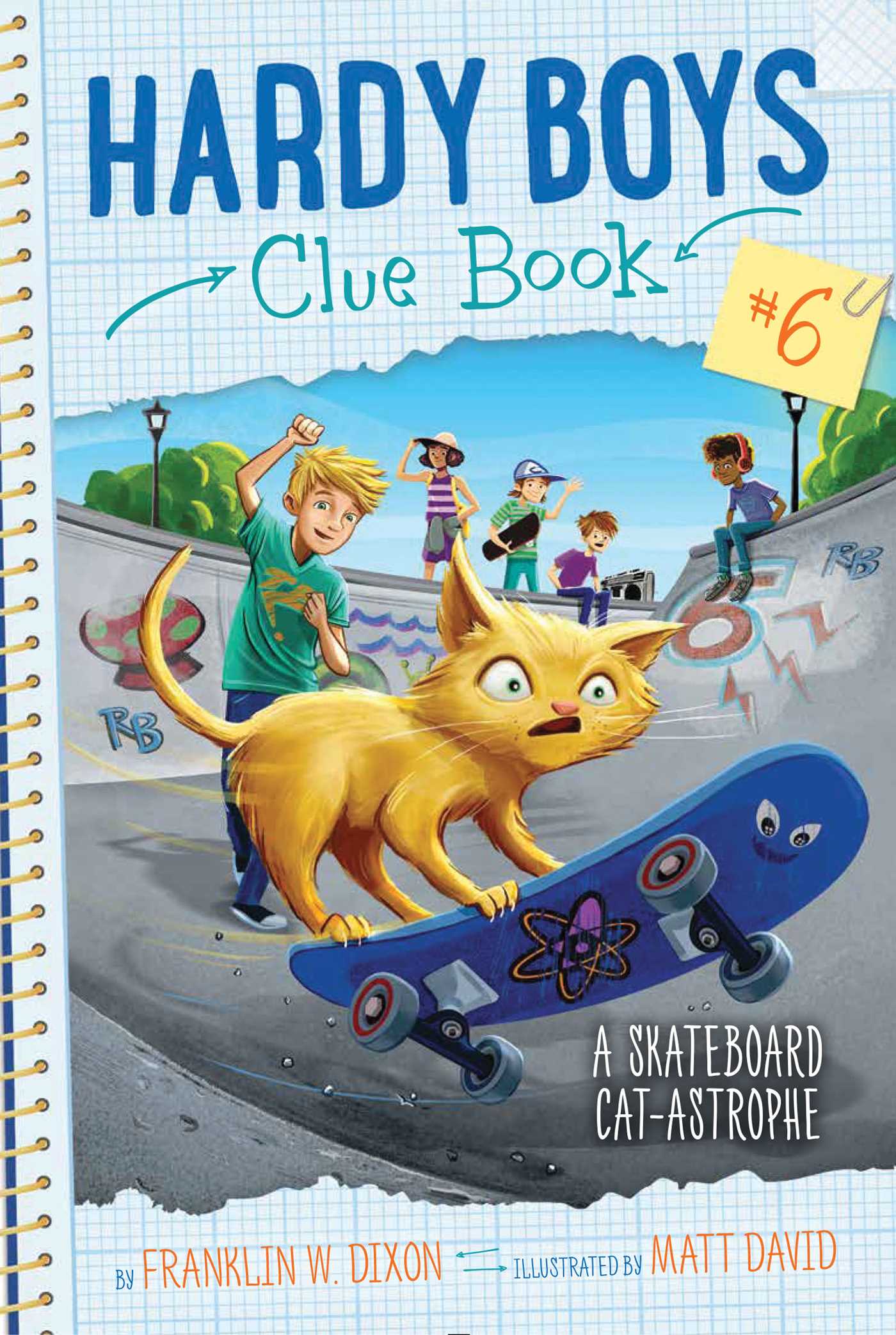 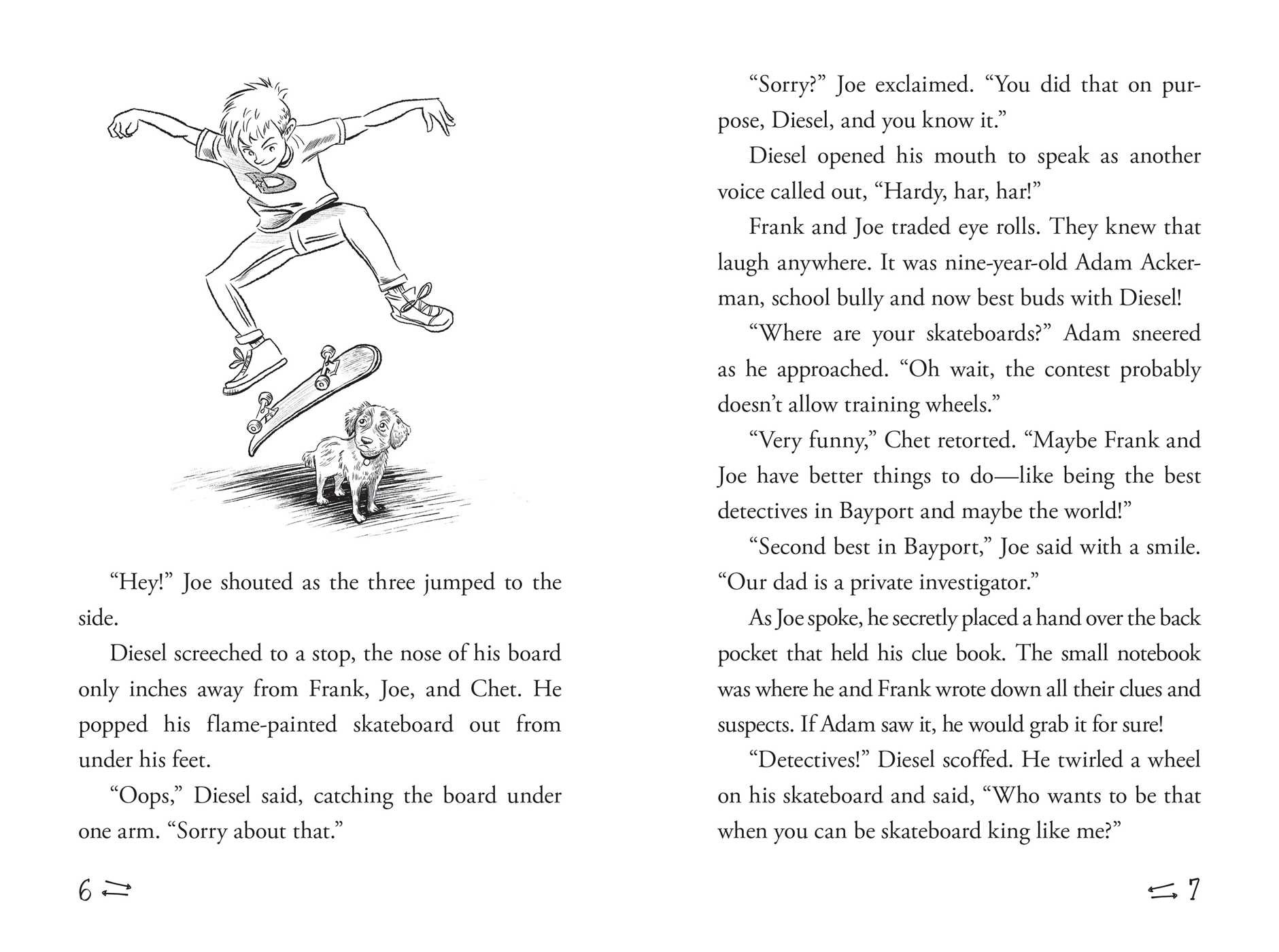 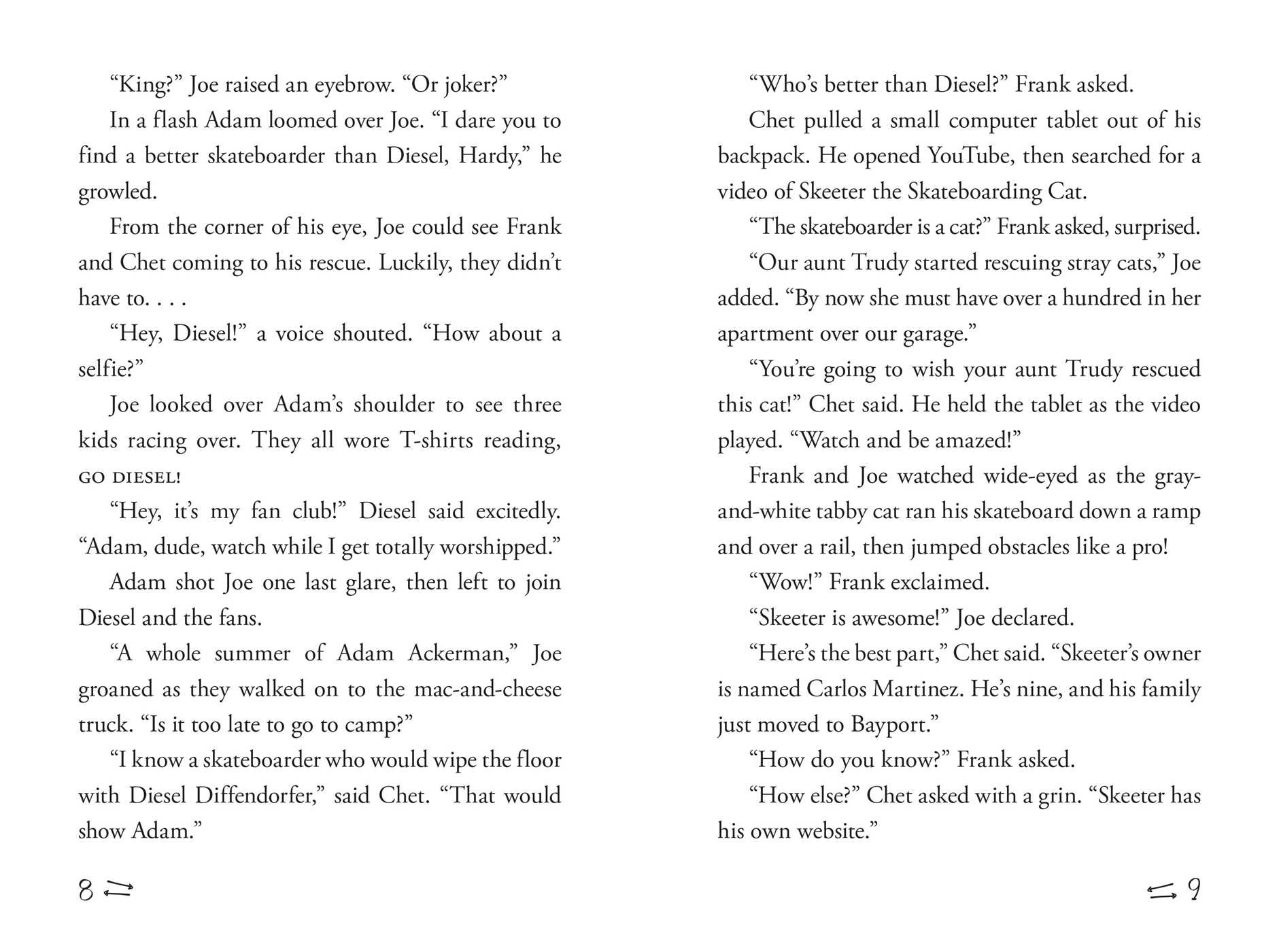 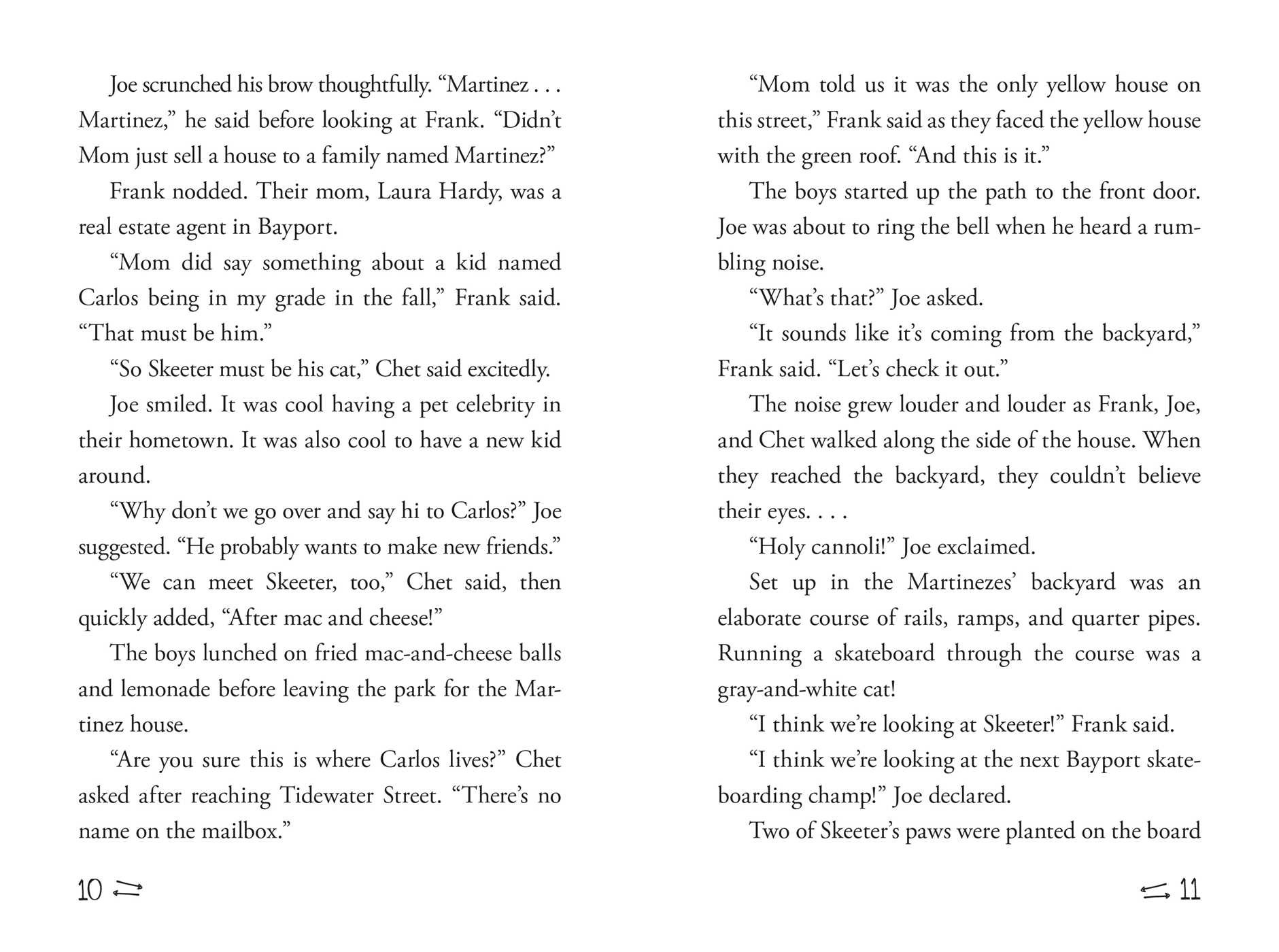 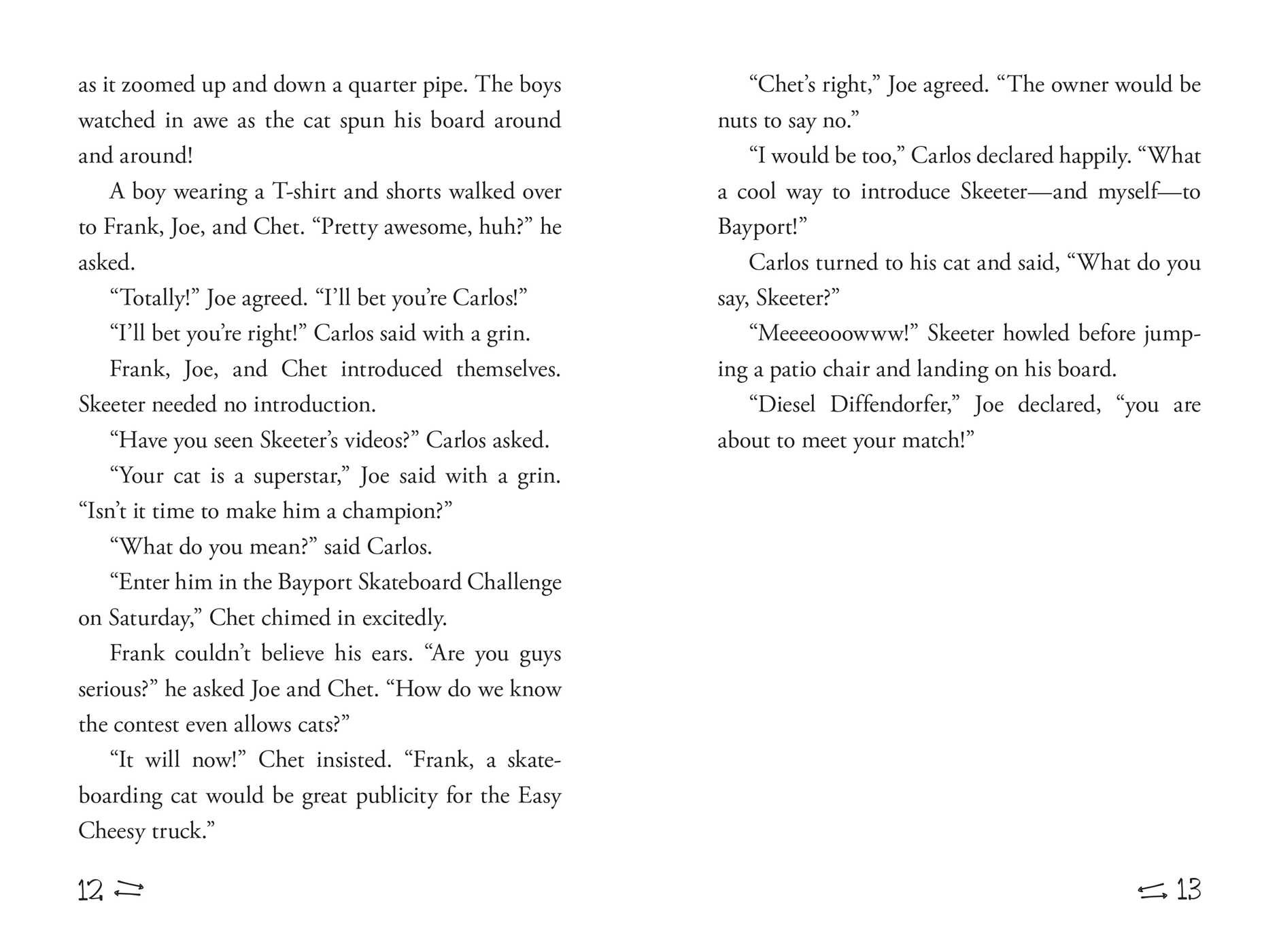 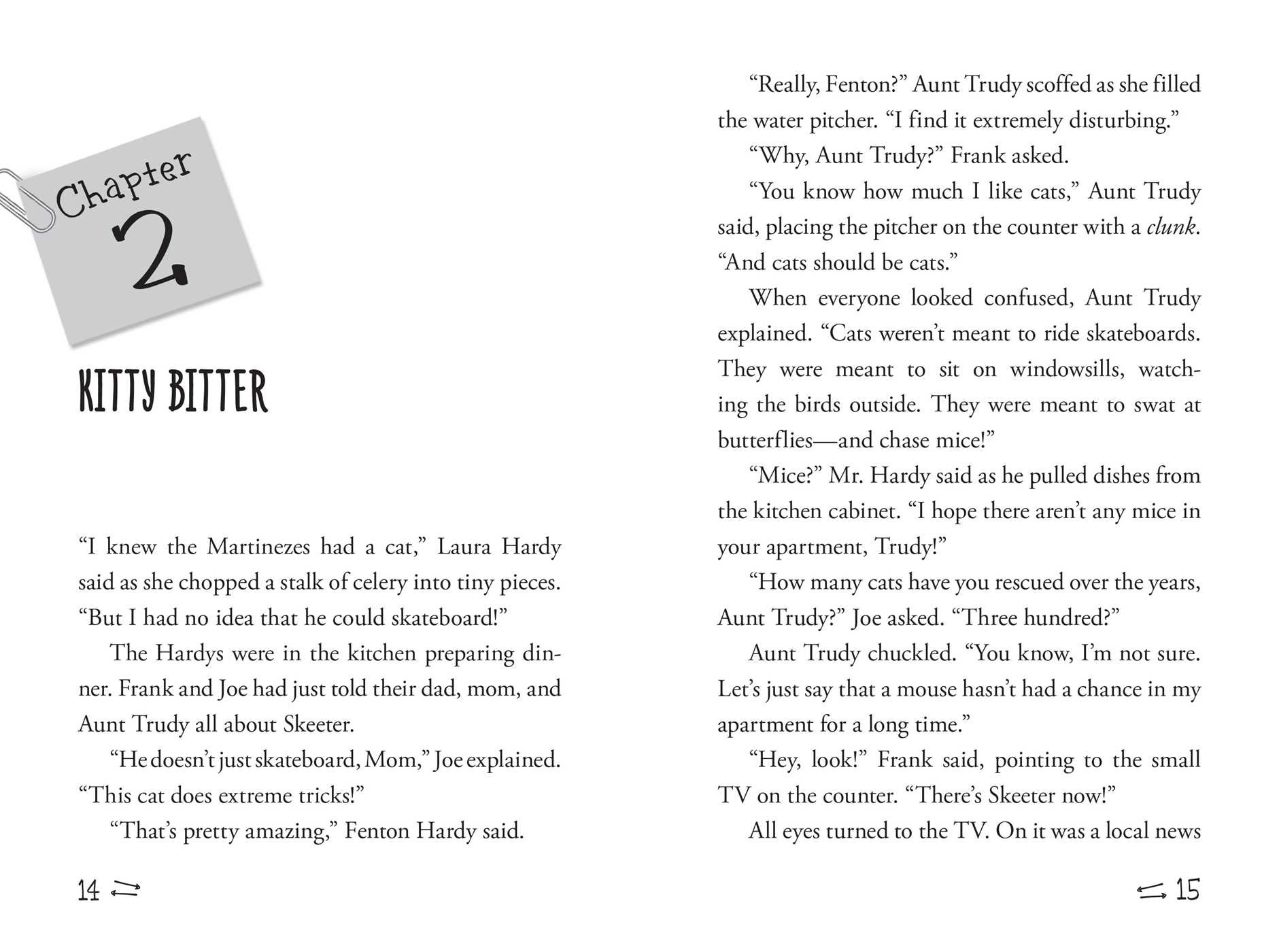 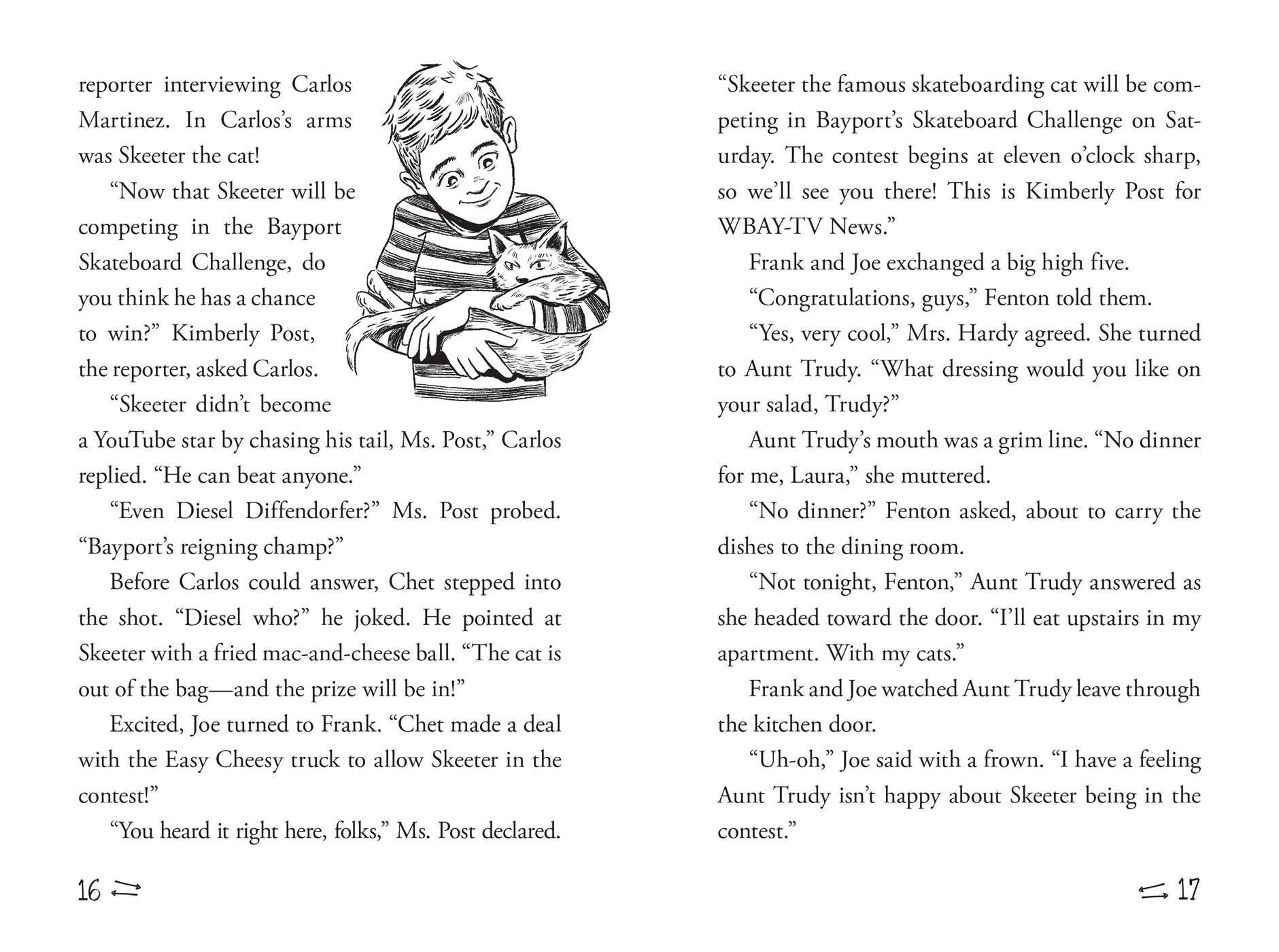 Detective brothers Frank and Joe must figure out who sabotaged Skeeter the Skateboarding Cat in the sixth book in the interactive Hardy Boys Clue Book series.

Everyone in Bayport is talking about the first annual skateboard contest. The winner gets free mac and cheese balls from The Easy Cheesy food truck for the whole year! Frank and Joe just wish there was someone to beat the school’s biggest bully, and best skateboarder, Diesel Diffendorfer. Then their best friend Chet shows them a video of Skeeter the skateboarding cat…a cat that happens to belong to the new kid in town, Carlos Martinez. Suddenly, a plan is hatched.

Carlos agrees to enter Skeeter, in the contest. Who wouldn’t want free mac and cheese for a year? But just when Skeeter hits his final trick, a mouse runs across his path! Distracted, Skeeter hops off his skateboard and chases after his furry foe. When Frank and Joe run to catch him, they discover the mouse was a toy. Could someone have sabotaged Skeeter’s big day? It’s up to the Hardy Boys—and you—to find out!

Chapter 1 BATTLE OF THE BOARDS
“Wow!” eight-year-old Joe Hardy exclaimed. “Check out all the kids here to watch the skateboarders practice!”

Joe and his nine-year-old brother, Frank, gazed at the crowd gathered around the obstacle course. It had been set up in the park for the Bayport Skateboard Challenge in just two days.

Their friend Chet Morton shook his head. “I think everyone’s here for the Easy Cheesy Mac and Cheese truck,” he said, “and their famous fried mac-and-cheese balls!”

The Easy Cheesy truck was parked a few feet away. The macaroni-and-cheese company was holding the skateboarding contest that Saturday.

“I heard the winner of the skateboard contest gets free mac and cheese the rest of the summer,” Chet shared excitedly. “And summer just started!”

“The winner also gets a gift card to the Complete Athlete store downtown,” Frank added.

“Plus free skateboard lessons from a national pro!” Joe chimed in.

Chet thought for a moment, then shrugged and said, “Who needs that? Let’s load up on mac and cheese!”

“Mac and cheese?” a girl’s voice piped up. “Seriously?”

The Zamoras owned the Pizza Palace restaurant on Bay Street, and Daisy never let anyone forget it.

“Did you ever see mac and cheese topped with pepperoni, mushrooms, or peppers?” Daisy demanded. “Did you?”

“Our pizzas taste way better than boring mac and cheese,” Daisy said, handing each of them a coupon. “And today we’re giving free toppings on all slices and pies.”

“Nothing says yummy like pizza in your tummy!” Matty declared. “Scotty and I made that up.”

“Plus,” Daisy went on, “if you order any size pie, it will be delivered to your home with a free Pizza Palace Frisbee.”

“A Frisbee, huh?” Joe said. “Thanks, Daisy, but we were just about to have some fried mac-and-cheese balls.”

“Can we get some, Daisy?” Matty asked his sister. “Puh-leeeeeze?”

Daisy glared at her brothers. “If more and more kids eat macaroni and cheese,” she said, “then our pizza place will go out of business.”

“So don’t expect those new scooters you wanted!” Daisy snapped.

The twins stared, horrified, at Daisy, then at each other. They then hurried after Daisy to the next group of kids.

“Pizza Palace will never go out of business,” Joe joked. “Not while Chet is around!”

“For sure,” Chet agreed. “I may like mac and cheese, but pizza will always have my heart!”

The boys began walking toward the truck until a grinding noise stopped them in their tracks. Glancing back, they saw Diesel Diffendorfer carving his skateboard in their direction.

A tiny dog stood in Diesel’s path. He jumped his skateboard over the dog, showed off with a kick-flip, then continued toward the Hardys and Chet.

“Hey!” Joe shouted as the three jumped to the side.

Diesel screeched to a stop, the nose of his board only inches away from Frank, Joe, and Chet. He popped his flame-painted skateboard out from under his feet.

“Oops,” Diesel said, catching the board under one arm. “Sorry about that.”

“Sorry?” Joe exclaimed. “You did that on purpose, Diesel, and you know it.”

Diesel opened his mouth to speak as another voice called out, “Hardy, har, har!”

“Where are your skateboards?” Adam sneered as he approached. “Oh wait, the contest probably doesn’t allow training wheels.”

“Very funny,” Chet retorted. “Maybe Frank and Joe have better things to do—like being the best detectives in Bayport and maybe the world!”

“Second best in Bayport,” Joe said with a smile. “Our dad is a private investigator.”

As Joe spoke, he secretly placed a hand over the back pocket that held his clue book. The small notebook was where he and Frank wrote down all their clues and suspects. If Adam saw it, he would grab it for sure!

“Detectives!” Diesel scoffed. He twirled a wheel on his skateboard and said, “Who wants to be that when you can be skateboard king like me?”

In a flash Adam loomed over Joe. “I dare you to find a better skateboarder than Diesel, Hardy,” he growled.

From the corner of his eye, Joe could see Frank and Chet coming to his rescue. Luckily, they didn’t have to. . . .

Adam shot Joe one last glare, then left to join Diesel and the fans.

“A whole summer of Adam Ackerman,” Joe groaned as they walked on to the mac-and-cheese truck. “Is it too late to go to camp?”

“I know a skateboarder who would wipe the floor with Diesel Diffendorfer,” said Chet. “That would show Adam.”

Chet pulled a small computer tablet out of his backpack. He opened YouTube, then searched for a video of Skeeter the Skateboarding Cat.

“The skateboarder is a cat?” Frank asked, surprised.

“Our aunt Trudy started rescuing stray cats,” Joe added. “By now she must have over a hundred in her apartment over our garage.”

“You’re going to wish your aunt Trudy rescued this cat!” Chet said. He held the tablet as the video played. “Watch and be amazed!”

Frank and Joe watched wide-eyed as the gray-and-white tabby cat ran his skateboard down a ramp and over a rail, then jumped obstacles like a pro!

“How do you know?” Frank asked.

“How else?” Chet asked with a grin. “Skeeter has his own website.”

Frank nodded. Their mom, Laura Hardy, was a real estate agent in Bayport.

“Mom did say something about a kid named Carlos being in my grade in the fall,” Frank said. “That must be him.”

“So Skeeter must be his cat,” Chet said excitedly.

Joe smiled. It was cool having a pet celebrity in their hometown. It was also cool to have a new kid around.

“Why don’t we go over and say hi to Carlos?” Joe suggested. “He probably wants to make new friends.”

“We can meet Skeeter, too,” Chet said, then quickly added, “After mac and cheese!”

The boys lunched on fried mac-and-cheese balls and lemonade before leaving the park for the Martinez house.

“Are you sure this is where Carlos lives?” Chet asked after reaching Tidewater Street. “There’s no name on the mailbox.”

“Mom told us it was the only yellow house on this street,” Frank said as they faced the yellow house with the green roof. “And this is it.”

The boys started up the path to the front door. Joe was about to ring the bell when he heard a rumbling noise.

“It sounds like it’s coming from the backyard,” Frank said. “Let’s check it out.”

The noise grew louder and louder as Frank, Joe, and Chet walked along the side of the house. When they reached the backyard, they couldn’t believe their eyes. . . .

Set up in the Martinezes’ backyard was an elaborate course of rails, ramps, and quarter pipes. Running a skateboard through the course was a gray-and-white cat!

“I think we’re looking at the next Bayport skateboarding champ!” Joe declared.

Two of Skeeter’s paws were planted on the board as it zoomed up and down a quarter pipe. The boys watched in awe as the cat spun his board around and around!

A boy wearing a T-shirt and shorts walked over to Frank, Joe, and Chet. “Pretty awesome, huh?” he asked.

Frank, Joe, and Chet introduced themselves. Skeeter needed no introduction.

“Your cat is a superstar,” Joe said with a grin. “Isn’t it time to make him a champion?”

“What do you mean?” said Carlos.

“Enter him in the Bayport Skateboard Challenge on Saturday,” Chet chimed in excitedly.

Frank couldn’t believe his ears. “Are you guys serious?” he asked Joe and Chet. “How do we know the contest even allows cats?”

“It will now!” Chet insisted. “Frank, a skateboarding cat would be great publicity for the Easy Cheesy truck.”

“Chet’s right,” Joe agreed. “The owner would be nuts to say no.”

“I would be too,” Carlos declared happily. “What a cool way to introduce Skeeter—and myself—to Bayport!”

Carlos turned to his cat and said, “What do you say, Skeeter?”

“Meeeeooowww!” Skeeter howled before jumping a patio chair and landing on his board.

“Diesel Diffendorfer,” Joe declared, “you are about to meet your match!”
Franklin W. Dixon